Fortnite: The one that might have changed the games industry forever 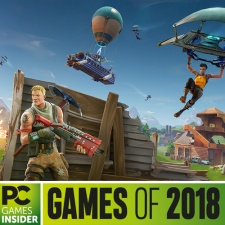 So last year, PCGamesInsider.biz declared that Playerunknown's Battlegrounds had changed the games industry. It's an assertion that we still stand by, but one that - with the benefit of hindsight - looks hopelessly naive.

At the time, Epic's Fortnite was a free-to-play survival game with a battle royale mode tacked onto it. But in the games press, we were so busy watching PUBG's rise, we didn't pay attention to the competition. Hell, when we spoke to creative director Darren Sugg about Fortnite's launch in July 2017 - pre-battle royale - it's clear that even he had no idea what was to come.

This is a game that saw 200m unique user accounts set up between July 2017 and November 2018. Said users are spending an average of $300m each month in in-game purchases, according to info from SuperData. A whopping 69 per cent of users are spending, too. Anecdotally, free-to-play game revenue is generated by 10-to-15 per cent of a project's user base, so over two-thirds spending is, um, huge.

With Fortnite, Epic did what Blizzard has done so successfully over the years; taken a niche and hardcore game type, added colour, flare and personality then polished it and boiled it down to its core making it - most importantly - fun and accessible in the process.

Part of the problem with being big is that you are very visible. Fortnite has, in some ways, become something of an epicentre for some of the issues that this industry needs to deal with moving forward

What resulted was an insanely popular title that shows no sign of slowing down. It's gone from being a secondary mode in a new game to being a cultural touchstone. It's a game that hip-hop stars like Drake are playing with massive streamers such as Ninja. The last time we saw a game go quickly into the mainstream consciousness as Fortnite was Minecraft, though that title had the benefit of being able to be spun as an educational prospect that didn't feature violence and so on. Epic's title, by contrast, hasn't had the same luxury. But enough about the cultural impact the game has had so far - we need to talk about the impact it could have moving forwards.

Part of the problem with being big is that you are very visible. Fortnite has, in some ways, become something of an epicentre for some of the issues that this industry needs to deal with moving forward.

In the first few months of this year, morning shows in America and the UK aired segments decrying Fortnite as an addictive force in society, bad timing considering this was around the time that the World Health Organisation was discussing adding various forms of video game addiction to the International Compendium of Diseases. This was something that Epic founder and chief Tim Sweeney - to no-one's surprise - denied, saying that Fortnite was, in fact, a healthy social pastime.

Though we have no doubt Mr Sweeney has pure intentions, there needs to be a more grown-up discussion around video game addiction. Many people who work in the industry have the kneejerk reaction of pointing out that video games are a positive force that can do no wrong - and yes, they can be. Trade bodies from around the world have refuted this condition being added into the WHO's resource.

But such a reaction brings a halt to a mature discussion and it's high time that the industry woke up and realised that there are issues in its midst that need to be handled. Video game addiction is one of them.

There's also been a discussion about age ratings, with a study earlier this year saying that around half of UK parents surveyed saying that they let their kids play 18-rated games. The organisation that carried out this research, ChildCare.co.uk was concerned about the number of young people playing Fortnite, a PEGI 12-rated game, too. There were anecdotal reports of schools in the UK sending home newsletters saying that it was fine for young children to play Fortnite as it is cartoon fantasy violence. Hmm.

Whenever there have been news stories about Fortnite being addictive or kids playing the game too much, the comments section soon descends into a flame war about how these are children being raised by bad parents who should better control what their spawn at up to. In essence, they're not wrong; responsibility ultimately falls to the parents or guardians to control what their kid is up to.

But at the same time, there is a reality that age ratings in video games are not treated with the same respect as film, to pick just one example. It's been suggested that many parents see these numbers are an indication of difficulty, much like LEGO. The games industry needs to do more to educate parents on the importance of these ratings. Before industry defenders hop in the comments to highlight that age ratings do exist - yes, hello, have you been reading this piece? - the litmus test of whether they are effective is what proportion of people are actually paying attention to them - and *that* figure is shockingly low.

These issues aren't new - far from it. But as the video games industry has become seen as a more positive force in the eyes of governments around the world, some of the negative aspects of the current market, such as those talked about here, had dropped from the front of our minds. Though dealing with these issues isn't going to be easy, I'm glad that Fortnite has reminded us that we still have a ways to go in some regards.

Fortnite has changed the conversation around selling games on PC, it is helping bring down the barriers that exist between different platforms, all of which are going to be healthy in the continued growth of the games industry.

This isn't to say that Fortnite hasn't had a positive impact on the market. Looking back, we'll see 2018 as a moment when the video games market changed forever, and Fortnite is at the centre of it. This is a game that proved that free-to-play could work on a mainstream triple-A console or premium title. It proved that you don't need to be on Steam to be a smash hit on PC. It gave Epic the clout and capital to set up its own games marketplace, one pitched - implicitly - as a contrast to Valve's Evil Empire with an 88/12 revenue split for developers. Even if it doesn't succeed on its own terms, it has made developers even more adamant that the 70/30 split on Steam isn't good enough anymore. Hell, we've already seen Discord change the terms of its store from 70/30 to 90/10. Fortnite was also the project that allowed Epic to push for and test cross-platform tech that it is now giving away to developers, for free.

It has changed the conversation around selling games on PC, it is helping bring down the barriers that exist between different platforms, all of which are going to be healthy in the continued growth of the games industry.

And yes, it has been the flashpoint for a number of discussions about the potential negativity around video games. We just hope that the industry is nearing the end of its adolescence and, moving forward, we'll be able to have a frank discussion about the fact that video games can be addictive and parents need more guidance when it comes to age ratings. As it stands right now, the games industry is still young, insecure and unable to embrace its own flaws.

Come find out about the future of the PC games market at PC Connects London 2019.