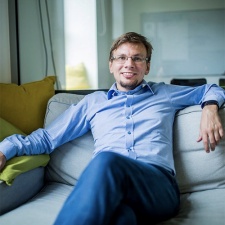 It's hard to think of an indie game from the last few years with a more memorable marketing campaign than Superhot.

The title started life as part of the 7 Day FPS Challenge game jam in August 2013, going on to crowdfund the title the following year on Kickstarter and eventually launching in February 2016 following a number of flashy, stylish and very memorable marketing campaign that boomed 'Super. Hot. Super. Hot' (see below).

Oh, and then there's the game's tongue in cheek ending, which compels users to tell all their friends about how "Superhot is the most innovative shooter they've played in years."

Now over three years following release, the company has sold more than two million copies of the slo-mo shooter, with revenue actually growing year-on-year between 2017 and 2018. It's fair to say that Superhot Team has come a long way from its game jam days, with business developer Tomasz Kaczmarczyk saying the title's success has validated the studio's strategy of doing everything it could internally.

"The most important learning was the validation of our initial strategy and approach of being incredibly independent and keeping things in-house," he tells PCGamesInsider.biz.

"All of the porting work, marketing and platform relations were done ourselves. We still own all of those relationships. We make the decision not to go with a publisher that maybe might have accelerated our development and plans to get localisation and different ports done earlier but because we did it ourselves, we were able to control all of those channels to make sure the amount of attention, visibility and support that our games are getting are the most we can get. That was really valuable and something I'd recommend for anyone that can in terms of video game development. If you can do your own ports and localisations, you probably should. If you're looking at just the business side of it, if you have a game on PC and you're porting it to all of the other platforms, you're probably going to end up making more money from the other platforms."

He continues: "You are taking more of a risk, but if you're looking at it from just the business and revenue perspective, your core business at this point is porting your game. If you are making more money on ports, then it's a big, big part of your core business. It feels wrong to give such a big part of your business to someone else who doesn't care that much about your game and who wasn't part of deciding what is going to make it unique and great and make it sell to players."

With the journey that Superhot Team has been on - having a hit game, deciding to self-publish, staffing up against that desire - often times the next step is to start publishing games ourselves. But Kaczmarczyk says that he views publishing as a full-time job and the team wants to continue focusing on its own games.

"Becoming a full-fledged publisher, that's something we're not looking at doing at all right now," he says.

"It's a tempting dream for a studio to pursue; you're looking at what you're doing as a company and you're realising that we did so well with our own game, we should try and use those same people and resources to publish other people's games, but if you're doing it as a side project, you're always going to be somewhat dishonest or you're going to be not the best value proposition for other games. If those people that are doing the publishing have to make a decision between helping grow their own games or someone else's, they should always go for their own. That means that you're not paying enough attention to the people that you're supposed to be helping. You should probably go for the all or nothing strategy. There are studios that are supporting indie developers with publishing: some successful mid-tier developers that are reinvesting some of their money into just financial support and business advice for smaller studios. That's a very wholesome and positive thing to do. Sometimes there are games and developers that don't need a full publisher; they just need a bit of a push, some connections and a bit of cash to help them finance the production of the release."

Part of the reason that the team behind Superhot was able to make what in hindsight were good decisions was down to SteamSpy. Sergey Galyonkin's data outfit was a vital resource for the Polish developer and one that gave it the confidence to walk away from the publishers that were circling the studio and release the game itself.

"[Prior to launch] we were very optimistic, but had reasonable expectations," Kaczmarczyk says.

"When we set off to work on Superhot, we were already able to credibly argue that it's going to be popular. Looking at the amount of attention it received, the number of people playing the prototype, the offers we were getting from potential publishers, we know it was probably going to be successful. Back then, SteamSpy was very helpful so we were able to figure out what it actually meant to be successful. We assumed that if we did everything right we'd be selling about 250,000 copies on Steam. That was our target and we actually exceeded that within the first six months of sales. That was very positive and a happy outcome for us. If there was no SteamSpy at that point, it would have been a lot harder for us to make good decisions. We were able to look at the terms from a publisher and say: 'Well, if we actually are as successful as we think we are going to be - and if we don't need the publishing money to finish the game - that means that we can be a lot more successful, independent and have control so we can grow the studio to just another level."

VR is one area that Superhot has been very rather successful, too. This version of the game was released in December 2016. Earlier this year, the studio revealed that 800,000 copies of the virtual reality version had been sold - around 40 per cent of total sales - while revenue from this edition had out-stripped the regular Superhot. Not only that, Kaczmarczyk reckons that Superhot might have had some success as a result of fellow virtual reality blockbuster Beat Saber, which had sold over one million copies in its first ten months in the wild.

"Beat Saber became the absolute platform seller for VR - that's amazing for us because there were people buying headsets just to play Beat Saber. It's not going to be just Beat Saber that they buy so eventually some of them converted and bought Superhot," he says. "Beat Saber probably made us a lot of money as well.

"Superhot VR succeeds at making the player feel absolutely amazing. You don't need to be absolutely amazing. If you play the game a little slower or more carefully, you still feel as if you are executing extremely complicated action sequences and are an absolute badass, even though what you are doing is more like tai chi. There are lots of slow and deliberate motions. The game is making sure that you feel awesome, not stressed and overwhelmed by the game at any point. It hits the sweet spot where it's really exciting to play and also extremely approachable. We can basically put your grandma into Superhot and she'll probably know what's going on."

Looking to the future, there's a lot more to be done with the Superhot brand. The Polish games outfit has been working on a standalone expansion called Mind Control Delete with the simple objective of just having more Superhot in the wild. Much of this new content is brand new, while some comes from concepts the team during Superhot's development that didn't make it into the original release.

"The game is very fun to play, but is a little short," Kaczmarczyk admits.

"We wanted people to be able to play it for longer. We decided to make a free expansion with more content but because we were very bad at doing things the easy way, we started a project that ended up being a two-year-long development project that has built a ten-hour-long game with loads of new mechanics, a completely new storyline and improvements on the core features of Superhot."

But what comes after Mind Control Delete? Does Superhot Team want to be working on titles in that series for the rest of their time or are there new projects or ideas on the horizon outside of the slo-mo shooter?

"We've got one big production team finishing up Mind Control Delete and another working on a new interesting unannounced thing. I hope we'll be able to announce that this year. We're not necessarily going to be sticking the Superhot genre and churning out more and more Superhot. For the team, it might be a bit tunnel visioning for the team. We know that there's still a lot of explore and to build out in the Superhot genre with the same core mechanics. We have a truckload of ideas and concepts for if we wanted to make another Superhot game. There's a lot of things that we have come up with. Some of them are doable, others are very difficult. We want to be very flexible and as open as we can be, either making interesting small games while we are pre-producing something bigger in the Superhot genre or just coming up with a new concept altogether."