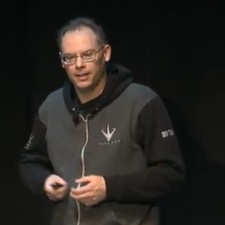 Asked by PCGamesInsider.biz about the matter, the exec said that the game was a 'social experience', as well as healthy, with groups of friends coming together to play the hugely popular title.

"Fortnite is a social experience that you play together with friends," he said.

"That's a healthy thing. It's not like you're sitting in your basement alone playing games like the stories in the past. It's a social experience and you're seeing more groups of friends playing together. That's great."

Sweeney went on to say that the team at Epic knew Fortnite was a great title, but no-one could predict that it would be as successful as it was.

"We really love playing it. We thought it had some of the magic you need for success but we never anticipated it being like this," he said.

Fortnite launched in July, with its free-to-play battle royale mode coming out in September. The game has come under attack in the US and UK, with morning shows on both sides of the Atlantic running pieces about the title being addictive.

These reports are badly timed for Fortnite, with the World Health Organisation looking to add two definitions of video game addiction to its list of diseases. Trade bodies around the world have been pushing a report saying that more research needs to be done into the matter.