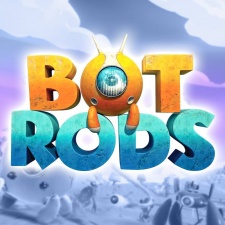 Today, we're speaking to Goutham Dindukurthi from Holy Cow Productions alongside Nirmal Kolady from Hobo Interactive, who submitted Bot Rods to The Big Indie Pitch (PC+Console Edition) at Pocket Gamer Connects Digital #1 and walked away as the champion.

Goutham and Nirmal: Bot Rods is a collaborative effort where three different indie studios from India came together to create a fun world of racing Bots. While we share the IP across our studios, Bot Rods is the brainchild of Hobo Interactive, who also leads the design and concept of the game. Holy Cow takes care of the programming and UI while The Cirqus handles everything on the art and animation front.

Bot Rods started as a concept for a racing centered animated series and was just begging to be made into a game. Our main inspirations are the Crash Team series, and of course the legendary Mario Kart.

We wanted something fun and family-friendly that anyone, regardless of age could pick up and play.

Tell us about Bot Rods that you pitched at the competition.

Bot Rods is a high adrenaline racing game with bots set in a futuristic world. The world is inhabited by adorable characters from many species and their equally lovable Bots (legged robot vehicles). The game is about all-out racing and using a trick or two to get an advantage over your opponents, including quirky weapons and downright ramming your opponents to slow them down. The game will include a single-player campaign mode where you follow a character's journey from rookie to Star Bot pilot. Local Split-Screen Multiplayer on PC and Consoles such as the Xbox One, Playstation 4, and Nintendo Switch is a big focus for the game.

What do you think are the most unique and interesting aspects of Bot Rods that gamers may never have seen before?

Unlike traditional arcade racing titles that generally have vehicles with wheels or boosters, Bot Rods uses quadrupeds running around gorgeous tracks and worlds. This opens up movement abilities like jumping, flipping, etc and adds in some elements of a 3D platformer.

There is a huge focus on appeal in design and creating endearing characters and bots.

Multiplayer gaming, especially when played locally with friends has seen something of a revival. What made you choose to focus on a genre that really encapsulates multiplayer gaming?

Local Multiplayer games are a great way to bring the family together and Bot Rods is a perfect game for such an audience. Bot Rods started as a T.V series concept centered around racing. What better way to race than against real people, especially when they are right next to you. That is why we focused on the split-screen local multiplayer angle.

How did you come to choose the platforms that you would develop Bot Rods for?

We wanted to make sure that Bot Rods as a kart racer should not be limited to any one platform, unlike some of the others.

Bot Rods is being developed for Xbox One, Playstation 4, Nintendo Switch, and PC (Steam) as of now.

In this case, there are three studios involved...each specializing in different aspects of the production process. The studios took on client projects while developing Bot Rods on the side. Though this allowed us to work without external funding, it did add to the development timeline.

Is it hard? Yes, It is. Good planning will take you a long way though.

Bot Rods is the first big collaboration we have worked on, and we did make a lot of mistakes along the way. Let us list out a couple of key things that we feel could have been done better.

Have a solid plan way in advance, and stick to it. Gauge your strengths and weaknesses and plan for scope accordingly. Yes, everyone wants to make the best game possible, but keep strict deadlines and prioritize to meet them.

Being part of the very first Digital Big Indie Pitch was quite an honour indeed. We came in hoping to learn from our peers and was pleasantly surprised at the win. The event was amazingly well managed, even though it was a first for all parties involved.

Getting feedback from fresh eyes was also one of the big takeaways for us. Being located in India does keep us away from some of the gaming events, and the digital event helped us bridge that gap. A giant Thank you to the organisers for letting us be part of it.

It was great to interact with our peers and get an idea of where we stand. The fact that judges can be publishers, developers, and game media professionals really helps with constructive feedback. We just wish we had more time with them.

Bot Rods is still in development and hopefully, events like the Big Indie Pitch will give us that extra push we need to sail through to the finish.

While we are finishing up the development of Bot Rods the game, we are actively looking for publishers. We have had a great experience working together and a lot that we have learnt which we hope to use and create exciting games in the future.

The Bot Rods animation series is also being developed at the same time, and we hope to be on a streaming service near you soon enough.