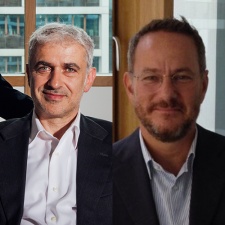 Started in 1989, the firm was initially a games distribution service called Halifax. Now it is a listed company that encompasses publisher 505 Games – a brand perhaps better known than Digital Bros itself - as well as the Digital Bros Game Academy and a wealth of game developers.

The firm has teamed up with some big names in the past. It owns DR Studios, Pipeworks, Kunos Simulazioni and Hawken Entertainment, as well as a stake in Ovosonico. That's on top of publishing deals on the likes of Brothers: A Tale of Two Sons, PayDay 2, Roll7's upcoming title Laser League.

But recently the company revealed what might be its biggest deal yet; it had signed on the dotted line with Quantum Break, Alan Wake and Max Payne studio Remedy Entertainment.

“This is a nice partnership,” CEO Raphael Galante says.

“Remedy is a triple-A developer with a great track record. We have very pleased and honoured to be part of its next project. It will help us grow and move to our next step. We are going to learn a lot through this partnership with them.”

There’s no doubt that Digital Bros will continue to team up with other interesting companies, be that invest, publish or purchase. But what kind of companies is Digital Bros looking to partner with?

“Well, they have to be a game company,” Galante laughs.

“We approach this on a project-by-project basis. Normally, there needs to be a good relationship between us and them; the value doesn't just come from the game; it comes from the relationship that you have with your partner. What we did in the past, such as DR Studios, initially just a publishing deal, but we liked the people, we liked the organisation and vision so they became part of the company. The same thing happened with Kunos. It's important to have a personal relationship and whether they fit with our mentality and vice versa.”

The Digital Bros Game Academy was set up in 2014, with 28 students signing up in its first year. Now 71 people are coming along for the course, and there’s room for more.

“The thinking was how we could create value in an industry like ours by bringing up talent,” GM Geoff Davis (right in picture) explains.

“Italy undoubtedly has a lot of talent. There are a few dynamics here - and this is across many industries - is losing that talent to more mature or accepting markets. Why should we see our best talent go to Santa Monica or Canada or Finland - why can't we keep them here? We wanted to build an attractive opportunity to value that talent. The other side was we are in Italy. This is where we started. This is a base, we are on the Italian stock exchange, there is every reason why we should be investing in talent and the company has shown that through the development studios. But we felt there was not a sufficient outlet to allow people - and there are a lot of people - who would like to get into the industry, to be able to get in the industry and close that skill gap. That's the thinking. Our objective is simply to identify and train the next generation of game development talent in Italy.”

According to Davis, the Game Academy is something of a start-up within Digital Bros. It’s a small operation, with a low number of places for students. As such, getting onto the course is tough.

“We do have stringent criteria - we're looking for people with a passion,” Davis explains.

“That passion changes when they get in; the passion as a game is very different to playing games than it is in a professional environment. People that have a real desire to be in the industry. We test that. We have them write a letter, they put together a CV, we check their language competency, we have a committee where we evaluate everybody. They have to turn in some sort of work; we need to see some kind of project.”

The course is clearly set up to improve education for game developers in Italy. While there is no requirement that graduates work in the region, Davis believes that even if they leave it still adds value to Italy’s games industry.

“We encourage people to create value in Italy. A lot of our partners, and most of the placement opportunities are in Italy,” he says.

“That doesn't mean we say 'don't go to Holland' or wherever. Typically, and this is very cultural, people want to go have an experience. This is what happens with Ovosonico - they want to have an experience and gain that knowledge and best practice and bring that back to Italy, and use that to either start their own studio or become a lead in a studio because that adds a lot of value to my persona and my professionalism.”

The Academy has already seen growth since its launch, and Davis says he has plans to expand it beyond just Milan; maybe even beyond Italy.

“We're looking at branching out,” he says.

“We're a private institution in Milan and a lot of people can't afford to be here or it's a struggle to delocalise and take the DGBA to other parts of Italy. We're also looking at multi-channel strategy, so how you can access that strategy and part of that is probably about digital blended offers. We know that the formula works. We're confident because we have seen the results in the market and the feedback we have received. We're looking at taking this outside of Italy and maybe branching out, replicating the model in other countries.”

Meanwhile, Galante’s ambitions for the coming year, are more to do with consolidation that global expansion.

“We want to grow,” he says. “That's important. But we like to have a very structured growth. It's important to implement our culture not only on the premium side but also on the free-to-play games we run. For sure, this is going to help us to consolidate our relationship with our partners. We want these to be long-term relations. We want to keep our DNA and look to our next steps, but step by step. On the distribution to consolidate our organisation around the world because we have offices in Asia, Europe and America. We want to improve the quality of our work and our management.”