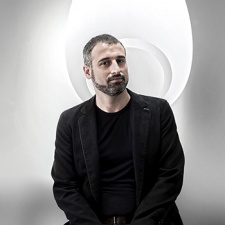 Let’s get one thing out of way: yes, Ovosonico is based in a villa on the outskirts of Milan.

It’s a change of pace from what we normally see in development studios. We’re used to seeing coders based out of their bedrooms and we’ve visited our fair share of triple-A studios based in skyscrapers, via indie start-ups in East London workspaces. But a villa? That’s different.

“It comes from my background. I worked and lived abroad for more than eight years in North America and Japan. I was attracted by the notion of working on a campus; a place where it's an office but also a place you can live,” Ovosonico founder and CEO Massimo Guarini says.

“I had a very bad period in my life when I was working in triple-A game companies like Ubisoft, where I didn't feel I was fit enough to make games anymore. I was really questioning myself in terms of whether I was capable for this job - I thought about changing careers. I couldn't relate to games anymore. I viewed that as a personal failure. It wasn't me thinking it was the industry's fault, that it wasn't catering to me anymore. I was the problem.

“That made me think about myself and what I want to do in games. I wanted to stand up and not be afraid to make a statement. I wanted to make the games I wanted to make, and make a point with them, have them be good business sense. We are making games to sell them at the end of the day, But it was a personal reaction to that moment. This is just the result. Thinking about myself five years ago when I founded this place, I wanted to have a house instead of an office, at the same price as an office. I didn't see myself being here five years ago. Now, after five years and two games, I can start feeling a notion of identity coming up."

The studio has just put out its second game. Last Day of June was inspired by the music of Steven Wilson and tells the story of a couple and a car crash. The woman is killed, while the man is confined to a wheelchair; he spends the game trying to figure out a way he could have averted her death.

Last Day of June launched on… the last day of August and so far Guarini is content with the response it has received so far; especially from non-traditional gamers.

“We are pleased with the overall reaction. I’d especially say from gamers,” he says.

“I’m always trying to be as horizontal as possible in terms of target audience, so if you asked me who that is, I normally answer 'human beings' which is something a publisher does not want to hear. That's provocative enough because I feel we should actually cater to people in general and not just gamers. I don't want to imply gamers is a negative label. Who are gamers? We have music-lovers and movie-goers... everyone listens to music and everyone goes to the movies, everyone plays games. I was overwhelmed listening to their reactions. I'm constantly reading the player reviews on Steam, we have something like 95 per cent positive reviews there, and it's overwhelming. You have the Call of Duty gamer that said we made them cry, which means it worked. Then you have the 40 year-old adult, who have kids and quit gaming like ten years ago who have bought a PS4 to play the game. That's something for me that was emotional. I even cried when I saw influencers playing Last Day of June and getting emotional and seeing all the reactions in the livestream where people were telling the streamer what to do. They were really into the experience. It felt like an MMO. One guy was playing, but the experience was shared by everybody. It's different because you're not watching an Overwatch match, it's different. The engagement was different as well. That was far beyond my expectations in terms of player reactions.”

Last Day of June is one of the biggest games from Italy to launch this year. It sits alongside other non-violent games like Mario and Rabbids: Kingdom Battle and Milestone’s line-up of racing titles. These titles are vital for Italy right now. The games industry is trying to achieve cultural recognition in Italy, with elderly members of the population - as well as right-wing groups - still thinking that games are violent and therefore a detriment to society.

“It is helping. We're working closely with the government. We have to somehow stick to what cinema did with tax breaks and investment and so on,” Guarini says.

“That's where it started for the movie industry. We're trying to replicate what they did. We're advocating the same way the UK games market did before. We're just a couple of years behind you in terms of mentality because we didn't have a development culture, we didn't have an actual economy around the development of video games. The numbers are still a little bit small in terms of revenue and gross income, but we are actually starting to win some battles. We already have tax break law in place, it just needs to wait for the European Commission, but we're actually moving forwards steadily. That's good. Games like Last Day of June and other Italian projects can actually make a point in terms of giving cultural identity or relevance to the medium itself.

"Getting public money to make shooters is going to be difficult in many countries. But the government help is just a little piece in the puzzle. To me, it's extremely important that the entrepreneurial mindset of investors and business people in Italy must change and be more open to not just trying to find investors locally. You need to be working on a different level and need to be able to prove your studio, prove to people that's not just about your idea. An idea is just ten per cent. Anyone can have a good idea - 90 per cent of the job is making sure that job can become a reality within the budget, within the time, within all these other constraints. Are you able to deliver? That's a big deal. That's where I as an investor would put money on you, not someone else.”

“My ambition would be to work on even deeper and closer to using systemic gameplay mechanics to express emotions,” he says.

“I want to prove to myself that in order to make a narrative or emotional game, you don't need to be sacrificing gameplay. I'm pretty sure we can make an amazing thing using gameplay mechanics, even sandbox or open-world mechanics, in a way that you feel something. It's all about what kind of rule conveys what kind of concept. 99 per cent of the time, the rule doesn't convey a concept. If you make that effort and connect the two things together, then you can get at . that result. That's my ambition.

"I would like to expand my audience and not shy away from the vertical of 'gamers', but don't even feel like I'm fighting against traditions. It must be natural. I'm not interested in replicating or following traditions in terms of gameplay mechanics. I'm not afraid of saying 'let's change routes'. I want to do that in a way that the experience makes sense. The final experience or product is the most important thing. It's not just for the sake of it. I want to have more ambition in terms of scope, reach and mainstreamness, in a positive way.”

He concludes: “Mass appeal to me is a film like Inside Out. My goal is to become like Pixar in terms of global reach, with a mass appeal and a strong DNA. That's more like our editorial strategy. It's quite unusual for a developer to talk about editorial strategies, but that's how I feel about it. I have to have that in mind to then be free to work my things out in that direction. It's hard for me to work without any direction.”

505 Games takes on Ovosonico for a “new, ambitious IP”