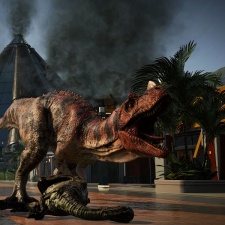 Jurassic World Evolution builds off Frontier’s experience to create a more carnivorous carnival tycoon than most, launching at No.4 last week. Speaking to us earlier this month, Neil Patel - managing director of investment firm Liberum - spoke highly of Frontier’s appeal to investors. “Universal Studios could have picked any games company on the planet to make Jurassic World, but the company went for Frontier. To win that is a great validation of the team.”

Developers with a strong E3 showing saw popularity this week. The Witcher 3 strode back into the Top Ten to take No.4, as CD Projekt Red revealed Cyberpunk 2077 footage last weekend. Follow-up announcements for Dying Light and Nioh, likewise, saw a surge in popularity in both, as they take eighth and tenth place respectively.

Bethesda revealed that development was underway on the next Elder Scrolls title. With a launch date still years out, players flocked towards The Elder Scrolls Online for their fantasy fill, taking the game to No. 9 in the chart.

Still clutching a half-empty tin of beans, survival games stubbornly stick to the charts with two entries. Ark: Survival Evolved is currently on discount for two-thirds off, and takes No. 6 this week. Raft drifts downriver from it’s spot at No. 2 to take seventh position this week.

Below is the Steam Top Ten for the week ending June 16th.