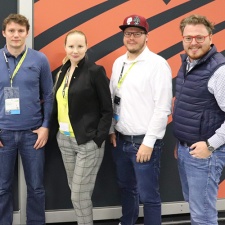 Ahead of Gamescom 2019, Russia's Mail.Ru's games brand My.Games revealed that it was launching its own storefront.

This follows a busy 12 months in the PC retail space; after years of dominating the market, Valve's Steam platform suddenly has competition from all corners of the market. Fortnite firm Epic is the biggest contender for the throne, with communications platform Discord also launching a short-lived storefront at the end of 2018.

My.Games - itself a relatively new brand - comes to the market with a wealth of experience. The team running this platform (pictured, from left to right: head of My.Games Store Rodion Kotelnikov, PR and marketing boss Elena Grigoryan, head of operations Volker Boenigk and comms lead George Korsakov, communications head) have been running the Russian storefront Games.Mail.Ru for a long time now, even claiming they are on a level with Steam in that region.

"We have been developing a PC platform for the Russian audience for several years already," head of PR and marketing Elena Grigoryan tells PCGamesInsider.biz.

"In Russia we are pretty strong and we're rather close to Steam in the region when it comes to monthly active users. In reality there's a small number of countries where the players and the PC platform is as strong as Steam. We are trying to expand our presence now with the help of the My.Games for the international territories. The main part of our audience is from Russia right now, but our strategy is to grow the audience internationally and launch a new platform based on the technology we have developed for our PC platform before."

All the new storefronts that have come out of the woodwork in the last 12 months have had a USP. Epic boasts a competitive revenue share as well as having billions in Fortnite cash at its disposal to develop the platform and provide incentives to developers. Discord's short-lived storefront had a hugely engaged audience which loves games. Even the blockchain-centric Robot Cache has something unique in the way it uses that aforementioned tech to both track ownership of games - allowing consumers to trade them in - as well as rewarding users with its own cryptocurrency.

The team at My.Games thinks that its experience as not only a storefront but also a developer and publisher provides it with some unique insights into how selling games works.

"When we started thinking about the platform, we believed that at the same time the publisher, the developer and the platform want help," Grigoryan explains.

"As a publisher and developer, we communicate with different platforms - not only with ours - but with Steam, Sony, Xbox Live and so on. We know a lot of issues that publishers have with communicating with these platforms. They know all the restrictions publishers and developers have to promote their products on the platform. When we started to think about our own platform, we think about it from the point of view of the publisher and trying to do the platform as well as possible from the publishing point of view - we want to avoid all the issues we have."

Operations boss Volker Boenigk adds: "From that perspective, the whole My.Games Store isn't just a store but is the whole platform, the whole ecosystem that we have in terms of features that are available for developers and, ultimately, the users. One of the key selling points in working with partners and developers is exactly that breadth of features that developers can choose to use to bring their game and integrate it with the platform. There are more things in development that we want to bring to the global audience, too. That ultimately will translate to the benefit for the users. It's not just about having a store; everything in My.Games connects and integrates. Consumers can play a game and earn some loyalty points and spend those in the store, for example. It's a whole interconnected ecosystem that we offer for players and developers to use."

A few years ago, a storefront's revenue sharing wouldn't really be big news given that almost everyone was going with the industry standard of 70/30. In the wake of Epic rolling out its own shop with an 88/12, however, any new platform coming to the market is going to be compared to that that more generous offer. My.Games has gone with a 70/30 split, but the store's boss Rodion Kotelnikov says that there is a lot of flexibility built into this deal.

"Most big stores have the same revenue share - Steam, the App Store, Google Play. It's the standard for the industry," he says.

"We are not only a platform; we're a publisher as well. If you want a custom revenue split or any other custom parameters, you can talk to our publishing team and you can discuss any custom parameters. We can talk about traffic coming to the platform or any other conditions. It's also worth pointing out that we are just starting. We have to begin somewhere. That doesn't mean this is for all ages. We can change our revenue share in the future."