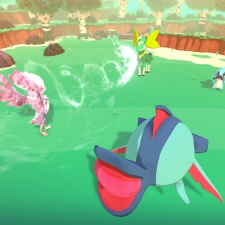 Humble Bundle's recently released Pokémon-inspired title Temtem has kept its place at the top of the Steam chart.

In the second place, climbing two places this week is the first of two entries for Rockstar, Grand Theft Auto V. The criminally charged title is on sale with 50 per cent off. Unsurprisingly, Rockstar's game was the best-selling of the last decade in both the UK and US.

Red Dead Redemption 2 is Rockstar's second entry as it takes the No.3 spot. Currently, the game is on offer with 20 per cent off. The western-shooter hit PC on November 5th, however, it didn't join Valve's storefront until December 5th.

Taking the No.4 spot is Monster Hunter World: Iceborne, the DLC was released on PC on January 9th 2020. In sixth place is Capcom's core game Monster Hunter World. By March 2019, 4.5 million copies were sold for PC. In total, 13 million units have been shipped worldwide as of July 2019.

Puzzle platformer Human: Fall flat has claimed the No.7 spot in this week's Top Ten. Curve Digital's title is on sale with 60 per cent off, the game first came to Steam on July 22nd 2016.

Returning to the chart this week is Playerunknown's Battlegrounds, the battle royale title is at No.8. According to esports players, 2020 is going to be a crucial year for the game as an esport. Activision's shinobi title Sekiro Shadows Die Twice is in ninth place, it took home the Game of the Year at The Game Awards 2019. Sekiro also received the Steam Game of the Year award.

Closing out the Top Ten is The Witcher 3: Wild Hunt Game of the Year Edition. CD Projekt Red's title has seen a successful run in the chart since the release of the Netflix TV series. The show is on its way to being the biggest first season for a series on Netflix, an anime Witcher film is also set to come to the streaming service.

Here is the Steam Top Ten for the week ending February 1st: