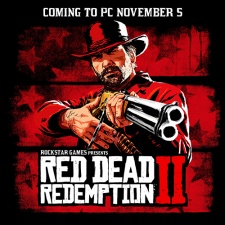 Rockstar has finally confirmed that its hit cowboy romp Red Dead Redemption 2 is coming to PC.

The 2018 blockbuster is launching on November 5th and is coming to Rockstar's own game launcher which was rolled out in October, as well as Epic Game Store, Green Man Gaming, Humble and GameStop among others. While the game is being released on Steam, consumers on Valve's platform are going to have to wait until December to buy Rockstar's game.

Take-Two has long been coy about whether Red Dead Redemption 2 was going to be coming to PC. That the cowboy blockbuster was coming to the platform was hinted at in October 2018 via companion app data, while a developer from Rockstar Leeds made reference - perhaps accidentally - to Red Dead Redemption 2 being on PC as well as PS4 and Xbox One.

Rockstar opting to launch its own game launcher on PC was also something of a hint that it had plans for the platform. Oh, and Red Dead Redemption 2 is also coming to PC.