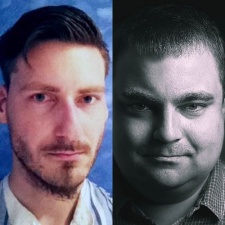 The indie label has acquired a majority stake in the developer, founded by the core team that made Good Shepherd-published Hard West and Phantom Doctrine, made by CreativeForge.

The new outfit already has 30 members of staff, including folks who worked at Techland on the Call of Juarez and the Dead Island series.

The company's debut project is set to be announced "soon". No figure has been placed on the deal as of yet, but as far as we can tell, this is the first time that Good Shepherd has bought a stake in a studio.

“We envisioned Artificer as a place where accomplished craftsmen may put their love of their work in projects they wholeheartedly believe in and do so in a sustainable fashion," the developer's creative director Kacper Szymczak (pictured, top right) said.

"I am tremendously excited to say that we have already built a close-knit team which is hard at work on our first project."

The studio's VP business and marketing Blazej Krakowiak (pictured, top far right) added: “On a professional as well as personal level, I'm very happy that there was an opportunity we could capitalize on. Good Shepherd is a trusted partner, with a fantastic team we know will lend Artificer its strengths, while guaranteeing the studio's independence.”

Finally, Good Shepherd CEO Brian Grigsby said: “We’ve been impressed by the quality and unique talent present in Poland and we intend to expand Good Shepherd Entertainment’s long-standing presence in the region with our newly formed Artificer relationship.”

Good Shepherd was founded back in 2011 as Gambitious. The rebrand to its current name took place shortly ahead of Gamescom 2017, with the aim of making publishing useful for both developers and investors. At this point, Devolver co-founder came on-board, as did Ben Andac, formerly of PlayStation UK's strategic content team.

Speaking to PCGamesInsider.biz last year, Wilson said that the indie games market has become tougher in recent times, as well as discussing Good Shepherd's approach to developers and the negative impact of toxic working culture at triple-A developers.

Earlier this year, Good Shepherd producer Lélia Peuchamiel told PCGamesInsider.biz that the role of the publisher is changing as more and more new storefronts and platforms emerge.