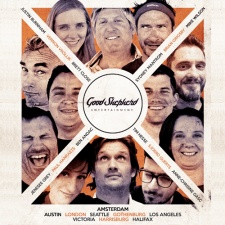 This was initially an investment platform designed to connect developers with a network of investors. The organisation started to include publishing in its line-up of services in 2014 with the launch of the highly successful Train Fever.

But last month, the company underwent a total rebrand. What emerged was Good Shepherd Entertainment, an organisation that is simultaneously an investor network and publisher for the indie space.

This new name was in part to make the new hires the firm made feel like the company they were working for was as much there’s as the founders of Gambitious.

The games space is new for a lot of investors, but Good Shepherd is hoping to not only bring new sources of money into the sector; but to keep them spending.

“Games are new territory for a lot of investors,” Good Shepherd founder and president Hanraets explains.

“We are opening up games to companies that normally invest in entertainment such as film. What I'm noticing is that those investing tend to be around our age, so they're gamers themselves. It's difficult and exotic to talk to them about investing in the games industry. There's a lot of education that still needs to be done on how the games industry works and the mechanics.”

He continues: “Globally speaking, access to funding and capital is still the biggest problem facing indie developers. That's a problem we are trying to solve. I know it's a less sexy topic, but we are really trying to give investors a positive experience so they will reinvest their money, be it in our projects or someone else’s.”

Wilson adds: “Entertainment is notoriously dangerous to invest in and for good reason. The biggest reason is that people's money hasn't been respected. Most of my friends are artists; I'm an independent film maker as well. I see over and over again, artists look at getting funding – be that through a publisher or a VC – as an obstacle to overcome. Once they achieve it, they say ‘thanks' and they're off to make their thing.

“People investing in a film or an album or a game are looking to have a different experience than investing in something safer. Because my partners and I are investors, and have a lot of experience of working with developers, we have a unique perspective that investors need to have a good time, too, so they keep coming back. I don't feel like a lot of artists think in that way because they haven't been on the other side of the table. That's why we're going to do well, that's why we've done well so far. We have a little over 100 investors so far that are mostly very happy and have had a very good experience.”

It’s no secret that the indie publishing space is notoriously busy right now – there seems to be a never-ending stream of publishers and companies entering the sector.

Andac has spent a long time in publishing, most recently in the Strategic Content team over at Sony Interactive Entertainment, and feels that though publishing has evolved with the rise of digital downloads, it hasn't changed enough.

“The publishing space has moved on massively over the past ten years,” he explains.

“The role of the publisher has historically not been very strong; the relationship didn't really exist, it was very dom-sub. That's the only analogy I can think of. People didn't trust each other and people weren't treated well. What we have seen with the tools opening up, with the route to platform holders opening up a bit, their curation is no longer an obstacle that you have to get over, it's a much more open environment.

“As a result of that, the options and dialogue that people have and the kind of relationships and business terms they can get are much better. A side product of that is that digital publishers have come into play. They've removed the physical retail element from the equation. They have focused on digital as that has become a bigger market for everyone, and they are really helping that space grow. The landscape has changed massively because of that. But what hasn't changed is that these publishers – be they digital-focused or not – have approached developers with good terms, but they are offering the same services – QA and localisation, marketing and PR support, ratings and so on. That's good but everyone does that."

So – how does Good Shepherd differ from this.. *ahem*.. sub/dom relationship?

"When people at a publisher come from an artistic or development background themselves, how can we have a more meaningful dialogue and conversation," Andac says.

"How can we have a rapport and make sure that the advice that we give and the burden we take from the developers is not just about the meat and potatoes of it and the production element of it, but how can we steer and shepherd in terms of their creative vision and help studios achieve their vision. It's important to say this isn't an imposition of will – we have no creative approval or say on games – which is where a lot of the old relationship dynamics came out of. That's the way publishers did treat developers."

“So, we are looking for people that are interested in that kind of relationship, and a lot of developers are, particularly studios that aren't graduates but people who are on their second project who are really trying to scale up and trying to do something innovative and different and want to derisk that. Why not then let us take the steer, not just the marketing steer where you accept you're not an expert in that but why don't we access our talent pool of writers and artists, UI and UX designers, musicians, editors, why don't we remove some of that burden too, see if there's a collaboration that can be made. People like that dynamic, as long as they know you're not trying to be a bully or determine what their vision is. You just want to be part of that vision. It's only fair as we are all in it together and want this to be a success for all involved. No-one wants to be a dick and it's just too small a world for that.”

Good Shepherd is still trying to figure out what sorts of projects it is looking to work with, but Andac insists that it’s important to invest in people as opposed to ideas.

“It seems a bit counterintuitive – I don't mean I would ignore that the game is, that's important to convey and to look at the big picture about what our portfolio looks like and what games we have, but the really important thing is to invest in people,” he explains.

“I don't have a genre-filling approach to a roadmap and a portfolio – I don't think 'we have a gap in this particular genre, we should do that' – that's not interesting. That's what really big publishers do, but if you go down that road, you end up being blinkered to really good opportunities and talent because it's a long-term relationship because there's more than just the one project. The kind of stuff we are looking for is people that are interested in this kind of dynamic and relationship, and people – regardless of genre - that have concepts that are innovative in some way, that are helping to move the medium forward in terms of creating engaging experiences that really show why this medium is so special and why it can achieve something that other mediums can't. I don't mean that a way that it's superior, but there are things that are very specific to games that you cannot recreate inevitably in a different form. I'm interested in people that want to explore that space and give them the freedom to experiment. That's what I care about.”

“We're trying to establish ourselves as a brand, not that we're going to have a distinct flavour of game,” he says.

“We'll be trying to establish ourselves and get the team gelled, keep building the machine to be something that we're really proud of, that we can compete with anyone and hopefully offer some things more pro-actively that the other 95 indie publishers are not.

“On the other side, we have this unique thing that no-one's done and we have no idea how it's going to go. I believe we are going to be successful in building this investor network. I want to double the number of investors by next year, get some big fish in that want to give us money for a slate of games. We're building this thing to scale, and we're not in a hurry.

“It's going to be a patient, methodical scaling, but we intend to see how many developers that have worthy projects that we can say yes to and how many new game investors, whether they invest with us again or not, if we can give a positive experience to so that they remain interesting.”