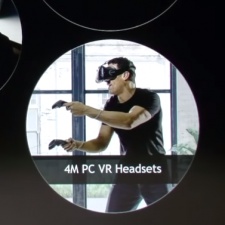 At CES 2019, CEO and co-founder Jensen Huang made the bold claim that over four million virtual reality headsets have been sold since consumer VR kicked off back in 2016. Tech outlet Road to VR was told by the GPU manufacturer that the figures come from data compiled by analytics company ABI.

Nvidia might not make its own headset - but as one of the two big names in GPU manufacturing, it has a solid stake in the VR game. The company also claimed a potential audience of over 8 million gaming broadcasters and 1.5 million 3D animators who could always use a new Nvidia GPU.

The numbers may assuage fears among some that virtual reality hasn’t really kicked off in the way many hoped. HTC and Oculus rarely provide exact sales numbers, and big players like Microsoft are already claiming the technology isn’t quite there yet for mass market appeal.

Nvidia likely wants to reassure shareholders that its investment in experimental technologies can still pay off. Shares took a hit in Q3 2018 after the blockchain bubble abruptly burst, with the manufacturer announcing that crypto would be “immaterial” to revenue gains for the rest of the year.