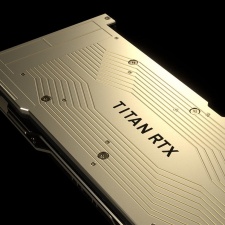 New data from market research firm Jon Peddie about the graphics card market in Q4 2018 shows that the sector is dipping.

The company reports that year-on-year the sell-in of graphics hardware has dropped 3.3 per cent, largely due to a 20 per cent dive in shipments of desktop graphics tech. Meanwhile, notebook GPUs saw an eight per cent rise.

Quarter-for-quarter, GPU shipments dipped 2.65 per cent with Nvidia seeing the biggest decline at 7.62 per cent. AMD saw a 6.81 per cent drop with sell-in of Intel's graphics tech decreasing just 0.7 per cent.

AMD and Nvidia's market shares decreased 0.6 and 0.82 per cent respectively, with Intel's slice of the pie increasing 1.4 per cent.

It's not all bad news, however, with Jon Peddie reporting that overall PC sales rose 1.61 per cent for the quarter.

“The channel’s demand for add-in boards in early 2018 was out of sync with what was happening in the market,” said Jon Peddie Research's president and co-founder Dr Jon Peddie.

“As a result, the channel was burdened with too much inventory. That has impacted sales of discrete GPUs in Q4, and will likely be evident in Q1, and Q2 19 as well.”

This is part of the aftermath of the cryptocurrency boom. Where before the market saw inflated demand due to cryptocurrency nuts buying huge amounts of GPUs to mine the likes of Bitcoin, now there is an excess of stock in the market.

Where before GPUs were hard to come by - let alone at a decent price - now there are large amounts of older models in the retail channel making sales of new top tier cards less enticing.

This was one factor in Green Giant Nvidia revising its fiscal guidance - as well as its revenue dipping 24 per cent for the three months ending January 27th, 2019.

In November 2018, Nvidia partnered with Epic Games with the hopes of shifting older GPU models with in-game currency for Fortnite.