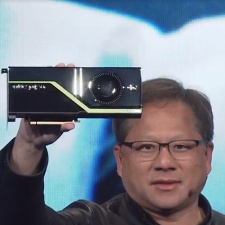 The cryptocurrency graphics card boom might be at an end.

That's according to Nvidia, which told investors - as reported by Seeking Alpha - that moving forward revenue from this sector would be "immaterial" and it was removing crypto from its financial outlook.

That a company that has benefitted so much from the crypto mining boom is stepping away from that market when giving its financial goals is an indication of how unstable it is.

A "sharp decline" in this sector led to a year-on-year drop of 54 per cent in revenue in the GPU specialist's OEM segment and a 70 per cent decline quarter-to-quarter.

Overall, Nvidia's revenue for the last quarter rose of 40 per cent year-on-year to $3.12bn. That's actually a decline of three per cent quarter-to-quarter, partially driven by the aforementioned crypto dip.

Revenue for its games business was up 52 per cent year-on-year, generating $18bn - over half the company's total revenue.

While Nvidia chief and founder Jensen Huang (pictured) admits that cryptocurrency has been a big driver for the company in recent years, that time is coming to an end.

"It is the case that we benefited in the last several quarters from an unusual lift from crypto," he told investors.

"In the beginning of the year, we thought and we projected that crypto would be a larger contribution through the rest of year. But, at this time, we consider it to be immaterial for the second half. And so, that makes comparisons on a sequential basis -- on a I guess, quarterly sequential basis harder. But, on a year-to-year basis, I think we’re doing terrific."

This means good times are coming to consumers looking to buy GPUs as margins are no longer going to be massively inflated by those looking to mine cryptocurrency.

"Let me start first with your question regarding gross margins," EVP and CFO Colette Kress said.

"We have essentially reached, as we move into Q3, normalisation of our gross margins. I believe, over the last several quarters, we have seen the impact of crypto and what that can do to elevate our overall gross margins. We believe we’ve reached a normal period, as we’re looking forward to essentially no cryptocurrency as we move forward."