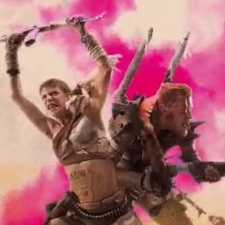 Upcoming anarchic shooter from Bethesda Rage 2 will not have loot boxes or in-game purchases.

That's according to id Software creative director Tim Willits who said in an interview with German games site GameStar that the forthcoming post-apocalyptic title would be employing a games-as-a-service type model for the release.

"We want people to play Rage 2 longer," he said, "and we think we can bring some fun stuff that makes it possible, but we'll talk about it in more detail as we move closer to the release of Rage 2 move."

He continued: "We will not have any loot boxes, I can say for sure. We have this novel approach: You buy the game and then you play it."

All of which is fair enough, but it's sad indication of where the games market is at in the wake of the Battlefront II microtransaction controversy that a developer can come out and say they don't have loot boxes in their game only to get free brownie points. Though we suppose it's better that the people profiting from this is the teams that aren't putting exploitative business practices in their games.

Willits also went into a bit of how the development process has worked, specifically how the teams at Id and Just Cause maker Avalanche Studios have collaborated. The creative director said that the latter brought "open-world expertise" as well as a much larger workforce.

"Avalanche has the bigger team," he said.

"But it has never been such a "develop a game and then show it to us" opportunity between us. Rage 2 was a collaborative project from the start. I and other people at id work very closely with Avalanche to create this id-like first-person shooter action. And at Avalanche is the Open World expertise."

Rage 2 is the sequel to the 2010 shooter from Id Software. The project was leaked by Walmart Canada last week, with publisher Bethesda announcing it officially earlier this week.