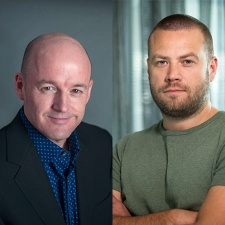 2011 first-person shooter Rage might have been a technical marvel, but the title wasn't exactly the biggest seller in the world.

It - at times - was a blast to play, but we can't imagine many people were eagerly awaiting a follow-up. Developer Id Software didn't seem hugely interested in making a sequel, either, cancelling a version of Rage 2 that was in production in 2013 in favour of working on what would become Doom 2016.

So it was with some surprise that a sequel to Rage was announced earlier this year. Well, leaked by Walmart Canada, with an official announcement following shortly after. Even more surprising was it wasn't just being developed by Id this time; the firm had teamed up with Swedish game maker Avalanche Studios - best known for the Just Cause franchise and its work on 2015's Mad Max for Warner Bros to make the sequel.

"We finished Rage, millions of people played it and it was great. We went to work on other things," Id studio director Tim Willits (left in picture) tells PCGamesInsider.biz.

"But we always had this place in our hearts for the game. We needed to find the right technology and a group that we can work with. We have these great IPs but not enough time and people to work on them all at once. We needed to find the right technology to truly make an ID style combat in an open world, as well as the right cultural team to work with. We've always admired the Avalanche team for a long time. When the opportunity arose and the studio was free. We wanted to work on Rage 2, they had the APEX engine. It was really a great combination. When we pitched the game to our in Maryland or Microsoft and Sony, the first slide was some colourful artwork, then the second was just the logos for Id and Avalanche. Everyone was like: 'Yes, that's it, we can just stop there'. It's been great working with the team."

Most of the heavy lifting is being done by Avalanche, with Id providing feedback and direction as to what the game should look like.

"We share everything that we do all the time and get loads of important feedback and direction from Id on things they found."

Looking back, Willits says that the original Rage sold enough to make a sequel, but that the focus on technology might have hurt the overall project - and this isn't something that's going to be happening this time around.

"[Rage] reviewed well and sold well, and it was profitable to make another one. The real thing it struggled with was the technology," he admits.

"Megatexture [a technology that allowed the game to feature textures too hi-res for available GPU power] looked pretty, but it did nothing for gameplay. The first person combat was ahead of its time, the enemy AI was great, the characters and world were rich but it was very split up. You had level loads, the driving was giant hallways.

"But with the APEX tech we can take the promise of Rage and make it. It's been very educational to work on an emergent gameplay design with Avalanche. For instance, we have this mission and we say: 'We can come in here, go there, do this and that' and they're like: 'Well, what if you drive the tank in the back door?' and it's like: 'Oh yeah, good point'. It's been very educational."

Wallmo adds: "Rage is still a great game and did well. It had a lot of brilliant and imaginative pieces. It's easy to work in that sense. Just take those pieces and evolve it into what we both feel it should be."

Indeed, the marketing around the game (above) this time around feels much more to do with its Mad Max anarchic tone and the feel of playing the game as opposed to the original Rage's very technical promotional push.

"There's a lot of tech in the APEX engine that can do a lot of stuff, but it's natural to focus on what the game is about and the experience we want to convey," Wallmo says.

"That, with having people playing it and reacting to it, is just the right way to package this game."

Willits adds: "We talked so much about technology with the first one that it turned out to be a tech showcase but it wasn't a gameplay showcase. We talk so much about the fun and the marketing and what you do and it overshadows the APEX engine because there's some cool shit that engine does. It's an evolution over Avalanche's previous games. The fact that we can do swamps and jungles and overgrown cities and caves and fun indoor and outdoor areas, it should not go unstated that it's a kickass technology. We do talk too much about the pink."

The aforementioned leak also worked in Rage 2's favour in some ways. After Walmart Canada accidentally outed a number of upcoming games ahead of E3, the Bethesda Twitter account decided to provide some, um, 'feedback' to the listing for Rage 2. Id was always going to announce ahead of the LA trade show to get ahead of the noise, but this accidentally tied into the anarchic feel that the company seems to be going for with Rage 2.

"Our community manager Jason Leavey works with [VP of PR and marketing] Pete Hines closely. Bethesda is a big company but we are still able to react fast because we have the right people in the right places," Willits explains.

"Those folks just ran that campaign and nailed it. Jason showed Pete the box art annotation and he was like: 'Just go, this is great'. Then we started the shotgun approach to marketing, followed by the live action, then the gameplay. We had Andrew WK open E3."