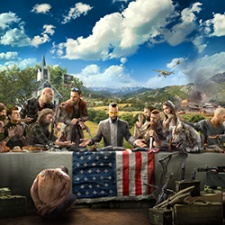 Less than three weeks after launch, Ubisoft's Far Cry 5 has been cracked.

That's according to a Crackwatch subreddit post, in which piracy group CPY claim to have cracked the open-world shooter yesterday. That's 19 days after release, for those keeping score.

The title used multiple layers of DRM, including Ubisoft's own Uplay as well as VMP, EAC and Denuvo anti-tamper tech.

Ubisoft will no doubt be annoyed by this development, but given that the title is already the second-biggest launch the French publishing giant has ever seen, it's fair to assume the top brass isn't overly worried.

By its own admission, Denuvo says it is not uncrackable, but its protections are there to secure a game's launch window, something that would appear to have happened with Far Cry 5.

The title usurped Playerunknown's Battlegrounds as the best-selling game on Steam when it launched, a first since the battle royale project took the No.1 spot last March.

That 19-day window is higher than the three or so months it took for fellow Ubisoft title Assassin's Creed Origins to be cracked, but certainly more than the, um, minus four days it took Final Fantasy XV Windows Edition to be pirated.

In January, Denuvo was bought by digital security specialists, Irdeto.

It's looking like Assassin's Creed: Origins has been cracked