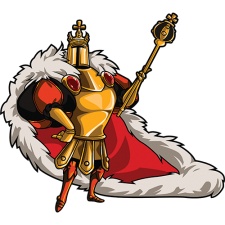 Developer and publisher Yacht Club Games has revealed more information about its upcoming King of Cards update for Shovel Knight.

Much like the other expansions for the critically acclaimed retro title, this has players taking on the role of one of the original release’s enemies. But this time around, Yacht Club has added in a card game element to Shovel Knight.

"Unwind and sharpen your strategic mind by competing in card battles with future subjects from across the land," reads the title's official press kit.

Shovel Knight is the latest release to toy with the card game genre. Blizzard notably created Hearthstone off the Warcraft IP, while The Witcher 3’s in-universe card game Gwent has been spun-off into its own release.

It's entirely possible we are reading too much into this, but given recent developments and interest in the CCG genre, it's not outside the realm of possibility to see Shovel Knight get its own card game.

Shovel Knight: King of Cards is set to launch early next year – more info can be found here.