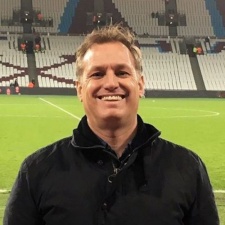 White has been hired as the Warwickshire-based firm's director of communications from esports firm Gfinity where he held a similar role.

Prior to that, he worked at the UK branch of publishing giant EA starting as senior PR manager in 2005, rising to be head of PR and ultimately to the head of communications role via a stint heading up the company's product marketing department.

"Its racing titles set the benchmark for quality within the games industry and I’m looking forward to playing my part in the company’s continued success."

White has come on board in the wake of a massive year for Codemasters. The racing specialist did its initial public offering back in May 2018 with a valuation of $371m, with chief exec Frank Sagnier saying that the digital market had offered the games business a level of stability never seen before.

It wasn't all good news, though. New IP OnRush saw a less-than-stellar commercial performance that saw layoffs made at the studio. Among these was Paul Rustchynsky, who moved to Codemasters back in 2016 following Sony's closure of DriveClub maker Evolution Studios; he now works at Slightly Mad Studios of Project CARS fame.

Codemasters has at least seen a big start to 2019 with Dirt Rally 2.0 being met with a positive critical reception - the PC version boasts an 86 score on Metacritic.