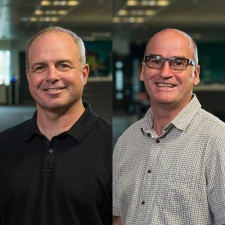 Since Jagex was bought by Chinese company Fukong Interactive Entertainment, the firm has been talking the big talk.

For much of its 18-year lifespan, the Cambridge based game maker has known primarily for one game, long-running MMO RuneScape, which has made $1.064bn as of June 2018.

The firm has tried to branch out before, without a huge degree of success.

Speaking to PCGamesInsider.biz last year, VP of product management Neil McClarty said that Jagex had ambitious plans to grow beyond RuneScape and that it wanted to help smaller developers - all of which has culminated in the creation of the Jagex Partners publishing label.

"Over the last year or so, people have been talking about the 'third age of Jagex' and how we are trying to transform the company into something a little bit bigger," Jeff Pabst (above right), newcomer head of third-party and partnerships - and a veteran of NCSoft, Sega, Trion Worlds and Microsoft - tells PCGamesInsider.biz.

"There are a few areas of focus there - one is investing in the core game of RuneScape and bringing those experiences to more devices and more people. You see that through the mobile stuff and bringing new content to the world of RuneScape. We're also looking to grow the business beyond the current focus of the two main titles - RuneScape and Old School - which is what we are doing now with products that we can help bring to market. The parallel discussion there has been becoming the home of 'living games'. That's really us leveraging the experience that Jagex has and bringing people with deep experience elsewhere to augment that.

"Games-as-a-service is something that you heard about maybe five years ago. But the idea of a live game moving to a living game is something that really resonates with the development community. We only look at games that fit that definition. What they've realised is this on-going, service-based live operations stuff is hard and they want people who have expertise and experience in that to help them."

Like any publishing deal, the specifics will vary. But Pabst and newly-appointed head of third-party product marketing Simon Bull (above far right) - formerly of EA, Trion and NCsoft - say that as well as the traditional publishing offering - PR, marketing and distribution - Jagex will be offering assistance when it comes to taxing work such as user acquisition, data science, monetisation and so on.

But before we go any further, we have to ask - just what is a living game? How does it differ from a live game?

"We debate this a lot," Bull says.

"It's an interesting one because the key tenants of a living game are the ever-evolving content. People will be able to play for years and years. There's a large out-of-game community, so people who are passionate and deeply invested about being involved and sharing with others both experiences inside and outside the game. The other component, which is more of a commercial side but is critical to our business is on-going revenue stream; there's the opportunity that it'll keep delivering income. And they empower players - let users have their voices heard in how the game is developed and how content arrives and how things play out. That's not necessarily meaning that players are designing games, but Old School RuneScape has an incredibly powerful community that is a part of that decision-making that's proved to be very popular."

The idea of a live game moving to a living game is something that really resonates with the development community. They've realised is this on-going, service-based live operations stuff is hard and they want people who have expertise and experience in that to help them

Of course, this isn't the first time that Jagex has opened a publishing division. Back in 2010, under the leadership of former CEO Mark Gerhard, Jagex propelled itself into this sector. The firm ended up with just a few titles in its portfolio, as well as a number of failures.

And while the Jagex of 2018 is a very different beast to the company eight years ago, there's certainly reason to feel somewhat cynical about this new venture.

It's worth noting that much of the staff involved, including Bull and Pabst, are relative newcomers to the firm, as are John Burns, who joined as SVP of publishing back in November 2017, and CCP vet Sarah Tilley has been hired as head of third-party product management.

But we have to ask - what is different this time?

"A lot of that is bundled up in the discussion that the company has been having around 'the third age of Jagex' - how it is trying to evolve and learn from the past," Pabst explains.

"It's not just Simon and myself, but the number of other people they are bringing in across the industry with deep and broad experience in a lot of different things is proof that as a company we're focusing on being successful around this. I wasn't here for that, but the commitment we have right now is around succeeding at this in a very focused way.

"Aside from the core focus on living games, we're also not trying to launch 20 games in a year. We're taking a very deliberate portfolio approach in order to make sure we can succeed. As a company, it feels like people have internalised that and we're getting a lot support as we move forward."

With the 2010 publishing venture, it certainly felt - at least from the outside - that Jagex just gave up after a few titles. That's not heartening news to developers behind living games - titles that are designed to last a long time. This time around, the team says the very fact that Jagex is focusing on these kinds of longer-term titles is a guarantee that the firm is in this for the long haul.

"The view is that by defining it as living games, you have a long-term approach," PR and marketing vet Jon Goddard argues.

"That defines the partners that we work with, the titles that you choose."

The fact that the investment in Partners is having a positive knock-on effect on Jagex has a whole, too, is surely another reason to stick with it.

"Jagex is investing in the publishing function overall to manage the core games as well as other new products that are coming out. The company is doing some ambitious stuff in a fairly short period of time," Pabst says.

"It's a company that's never been on mobile but it's launching effectively two games with Old School in soft launch. That's a whole bunch of stuff that the company hasn't done, but they've brought in people who know how to do that and will be able to support and invest in it. We're not stealing resources from the core games; we are focused on the core group of people who have the right experience to build this out. As we grow, we will continue to invest in that."

By focusing on service-based projects, it also seems logical that Jagex is creating its own competition. Gamers tend to focus on one or two titles of this kind, which means future Partners releases could well erode RuneScape's userbase, as well as each other. But Bull argues that Jagex Partners' strategy reduces this risk somewhat.

"Our approach is few versus many," he says.

"We don't have a hard number on it. It's generally accepted from our research that people don't just play one game, but they also don't play five or six. They do cross genres and don't play the same sort of thing. By not focusing on driving volume and just having a few titles, we've negated that a bit. I wouldn't say that we're necessarily going after games that are that close to RuneScape necessarily. What we look for are games that are complementary to a RuneScape player. If you can see one of those gamers playing a game that we have been looking at and talking to developers about, then we can see us publishing that."

Jagex is investing in the publishing function overall to manage the core games as well as other new products that are coming out. The company is doing some ambitious stuff in a fairly short period of time

Looking forwards Partners' first year, the team is hoping to carve out its space in the sector. It's unclear when exactly the label's first game will be released - or when it will even be announced - but Pabst hopes in the next twelve months Jagex Partners will be able to announce at least one of its partnerships.

"Our focus in the coming six months is really to establish ourselves in the market and in the minds of the development community as a trusted and capable publisher," he says.

"Ideally we'd like to be able to announce at least one or two key partnerships in the next year that personifies what our philosophy and our approach is. I'm a big believer in under-promising and over-delivering. If we can continue to make progress from now over the course of twelve months, then the team will feel that's a success.

"Ideally you do want to have some really big milestones. Once we're out in the market, the aim is that every time we have a chance to engage with partners, we make a better job. In a year, it'd be nice to have a game or two that are at least announced or in flight. Those aren't hard fast goals. We're excited. We've had lots of good reception. All the partners we talk to are really excited about it and we're hoping for good things."

In the age of games-as-a-service, talking to Twitch and Facebook is the "most important" thing, says Jagex