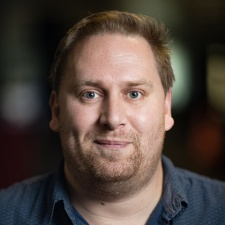 Last year's news that Jagex was to be purchased by Chinese company Fukong Interactive Entertainment came as something of a surprise.

Well, not the deal itself. Word that Chinese companies – including a mining company – were sniffing around the MMO firm had been out for some time.

This followed a few disappointing years for the company. Projects such as MMO-turned-MOBA Transformers Universe – among others – failed to release, while projects such as RuneScape spin-off DarkScape were closed due to lack of interest.

Now, with fresh backing, new offices and a brand refresh, it’s looking like clear sailing for the studio.

“Since the change in ownership last August, we've been working really closely with Fukong to get ourselves in a position where we have a really clear road map,” senior product director Neil McClarty explains.

“It's fair to say we've been in a bit of a bubble over the last few years. We've been quite insular at times and not necessarily as engaged as much as we could be, certainly in the UK. There's a lot of people for whom Jagex is a bit of an unknown. We're proud of the success we've had over the last 16 years. We want to really be out there supporting the UK games industry, be a leader, doing more of what we have been doing, and sharing what we have learnt.

"We have very ambitious plans to grow beyond just RuneScape and PC, and take it to the next level in terms of mobile and VR.”

RuneScape is Jagex’s bread and butter – it’s the game the firm has more or less grown around and has been played by more than 250m people.

“Now, it's all about more people coming back to the game. Both RuneScape and Old School (more on that in a moment) are incredibly healthy now. Our player base is pretty much split 50:50 between those games, which is great for us as it means that we have two independent very communities that have their own approaches to engaging with RuneScape. We've evolved with that. We have redistributed stuff, we have teams to accommodate both and we have two solid MMOs that are doing incredibly well. With that, we can now look to build upon that within both the RuneScape franchise but also beyond as well.”

The mention of ’Old School’ there might have some readers confused. Back in February 2013, Jagex decided to revive a ten-year-old version of the MMO.

“It was very much player-driven,” McClarty says.

“It's a challenge for any game that stands the test of time. If you don't evolve you die. When you do, you end up alienating a subsection of players that prefer the way it was before. After so many years, it had become too much of a step beyond. Old School is a change to re-engage players that maybe had not enjoyed and embraced change but loved the vintage version of RuneScape.

“We found a dusty old cartridge that had a backup of the game from August 2007 – we literally found that at the back of a cupboard. The plan was for us to democratise this; listen to the players and have them decide if this is something they want. We had overwhelming demand, we had over a half a million people vote to have it come back. We set up barriers to say if it hit certain goals we would commit a certain amount of resource. I think they just pretty much reached the half million goal, which was that we'd have a team full time to maintain the game.

“That was four years ago. Now that's gone from having a small subset of players to being 50:50 in terms of the player base. The degree of change is on them. If they don't want it to change, they speak and things don't get added. Everything we want to change has to go through a poll. If it doesn't get 75 per cent approval, it doesn't go in the game.

"We love the fact that that's the case. I don't know of any playerbase that's happy when something doesn’t get added to the game. There's even unique content in Old School now that isn't in RuneScape. It's gone on its own path while ensuring the RuneScape IP and brand is consistent across both brands.”

It isn’t just focusing on RuneScape either. Like many experienced games companies, it is looking to help smaller developers.

“Jagex is in a really unique position,” McClarty says. “We're not one of the big triple-A teams, but we're also not an indie. We are really proud to be in that middle ground where we can be that bridge between the two. We have an opportunity to give small indies a leg up that maybe they need to take their awesome games.

“These days, the quality of content coming through is incredible and we want to be a better neighbour and part of the UK games industry to embrace that stuff. We want to be involved in more projects and games and it makes sense to get behind these guys. We have a thriving indie community in Cambridge particularly. and it's become a hub for that kind of stuff. We want to see more and more and proactively get behind it.”

It certainly feels like that Jagex of today is much more focused than the last iteration. The firm appears to be sticking to what it knows and spending less time pursuing doom ventures, like the aforementioned Transformers Universe.

“Transformers was a disappointment for Jagex, but following that we looked back at ourselves and asked what we do really well and what we need to build upon to get a really stable base,” McClarty explains.

“It was around the same time that we had launched Old School. We were getting tighter again to our community. From 2013 to last year was all about stabilising and growing and building a solid base. We have a really clear idea of what we want to do with RuneScape over the next five to ten years.

“We will do more and I do think we will add more than just RuneScape but I think we'll do it in a very measured and sympathetic way that will leverage all of the good we have learnt. We're incredibly good at live service games, free-to-play; we know how to manage communities and how to evolve with the times.

“When RuneScape launched mobile phones, social media and different business models didn’t really exists. Through all of that, we have been able to evolve and change.

“The secret sauce that Jagex has is something we can apply to other live service games, which is where we'll be focusing our efforts in the coming years.”