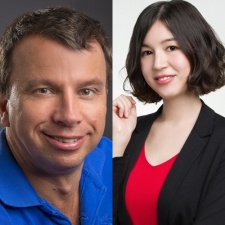 Curran will lead Jagex’s outreach to external studios as the company seeks investment and partnership opportunities. Curran had been with Chinese publisher NetEase for five years before joining Jagex.

Burns meanwhile has joined as SVP of Publishing where he will support the company’s plans to expand its portfolio.

He’ll be responsible for leading the strategic growth of Jagex’s portfolio of live games through both expansion of the company’s existing IP and new product development.

“Our ability to attract experienced industry talent such as John and Cassia, while also recognising the value that Neil has delivered for Jagex, is indicative of our acceleration as we strengthen the leadership of our publishing, product, and partnership teams.

“We are bolstering our portfolio with franchise extensions, including RuneScape and Old School on mobile, we have new franchise titles in production for both the Western and Eastern markets, and continue to explore external studio and product investment opportunities to complement Jagex’s long-held expertise in running living game worlds.”

Earlier this year, PCGamesInsider caught up with Jagex to talk about the game firm's plans for expansion beyond RuneScape.