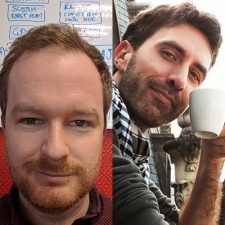 Dead Cells from Motion Twin was no doubt an ambitious title. Not only was it the French studio's first PC and console project, it also combined elements from both the Metroidvania and roguelike genres- well-trodden ground, especially in the indie games scene.

Yet, Dead Cells has not only been a smash hit for the studio, selling over two million copies to date. That follows the one million copy milestone when we sat down with them at GDC 2019 - but also a huge learning experience for Motion Twin.

"We severely underestimated the complications of what it meant to simultaneously ship on console. When we last spoke with PCGamesInsider [at GDC 2018], we were out of Early Access and in March we were preparing for the console launch," marketing and comms boss Steve Filby (pictured, above right) says.

Motion Twin designer and chief Sébastien Bénard (pictured, above far right) adds: "Looking back, this proved to be a good decision at the time but it was the most stupid thing. We didn't have experience in making a simple PC title. Deciding to make the console versions all at the same time was ridiculous."

The duo says that they wouldn't change anything about Dead Cells' development if they could go back as what Motion Twin did ultimately worked just fine. They do, however, say they would probably give themselves a few more months to work on the game.

"When we announced we were going to Early Access, we told players it was very important but we talked about staying in there for longer,"Bénard says.

"We actually took a year-and-a-half there because of all the feedback we had. That's something we talked to our community about."

Motion Twin will not be a giant company because of how it is run. You can scale a co-op to any size that you want, but you have to run it like a business. You can't have 50,000 people all getting a say in every single decision in the company.

As mentioned earlier, Dead Cells had sold over one million copies as of March 2019. PC is still the lead platform in terms of sales - unsurprising given that it has been out on Steam via Early Access for a longer period of time, during which it sold 730,000 copies - but the indie hit is actually selling faster on Nintendo's Switch console. This is somewhat surprising given that the game is comparatively expensive compared to other similar titles on the hardware.

"We were charging that amount because we're sick of developers shooting themselves in the foot and charging like $5 for their game when it is worth more," Filby explains.

"The fact that Hollow Knight is out for $15 is a travesty - that game is easily worth the same price as our game. Easily. It's a fantastic experience. I feel they are doing themselves a disservice but they're also not helping the rest of us. It's not just them - I don't want to just pick on Team Cherry because they are great. Everybody doing the indie price of $15. We were like: 'We know we'll discount the hell out of the game all the time because that's how the world works; we think it's worth more than $7, so we'll price it higher. Again, it's about saying: 'Hey, we worked our arses off on this. If you want to support us and if you liked the game, buy it at full price. We'll be stoked, that'll allow us to make other games in the future. If you want to wait for it to be on sale, you know it's going to eventually be on sale'."

Bénard adds: "That's something we learnt before Dead Cells. We were making web games for 17 years. Moving the price tag down doesn't make a game more successful most of the time. It's more about communicating about price and explaining why it costs this much. It's about making sure your price is fair. If people have concerns about it, just explain why you are charging that much. Most of the time it's okay. That's something we learnt before. Making it cheaper isn't the answer."

Dead Cells has clearly been a big hit for Motion Twin but the studio is in no rush to expand massively as many in their situation would. This is partly because the French developer is a co-operative, meaning that every employee is compensated the same and has an equal say in any decisions that need making.

"Motion Twin will not be a giant company because of how it is run," Filby says.

"You can scale a co-op to any size that you want, but you have to run it like a business. You can have an office sharing arrangement, you can have people responsible for their area of expertise but you can't have 50,000 people all getting a say in every single decision in the company. Our way does make things slower in some respects, but we need to take ownership of the decision to stay smaller so we can all always talk to each other."

He continues: "When you go the Motion Twin paradigm - I come from a traditional working background - it just feels right. It makes sense. You're doing it every day and you're thinking: 'Of course this is how you should organise life at work'. When you start telling people about it, people are saying that this is how they want things to be. We're doing it, so they give it a try. You can tweak a few things in the way that a company is run and all of a sudden you have this intense feeling of ownership and responsibility and worth in what you are doing."

He concludes: "A lot of people are looking for that feeling today."