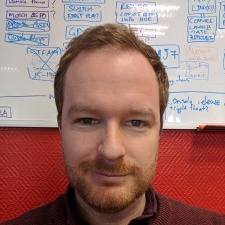 With more than 730,000 copies sold, it's fair to say that consumers have gotten on board with Dead Cells' combination of roguelike and Metroidvania gameplay, as well as its pixel art style.

But the game could have turned out to be massively different. This is French developer Motion Twin's first 'proper' PC title, having previously focused on Flash and mobile games. That all changed in 2015, when the studio decided it was sick of working on these titles.

"When Dead Cells came about it was an idea of a spiritual successor to one of our really successful web games, Die2Nite," marketing and communications bod Steve Filby says.

"It was supposed to be a multiplayer online free-to-play cross-platform mobile web tower defence game. As we kept making prototypes, we just realised that we couldn't get the multiplayer to work; we just couldn't find a fun design. It looked good on paper, but when you sat down to play it didn't work.

"The head of Shiro Games, who shares our space, played the single player bit and told us we should make that as it was awesome. We tried to that and it was tower defence, but where the player could move around. We were still letting go of that mobile development and free-to-play web-based mentality. So we went: 'screw it' and made a full action-based platformer."

But how did the mix of Metroidvania - exploration and platforming - and roguelike - procedural generation, permadeath - elements come about? Simple, sort of. Half the studio loved Metroidvanias; the other loved roguelikes.

While nice and diplomatic, this raised other challenges for Motion Twin - namely that the project was quite buzzword heavy.

"When they decided to add the roguelike part in I was on holiday. I came back and they told me - I was like 'You're kidding me'," Filby laughs.

"My job as producer is to make sure the game gets to market and that we make something that everyone is going to play. I had to take the idea and pitch it to publishers and saying: 'It's another pixel art roguelike platformer' and people are going to look at it and go: 'Well, what's new with this?'.

"It was a massive concern for us all. We were joking around and our art director came up with the term 'roguevania'. We were trying to make this kind of gameplay compelling. One of the difficulties, in the beginning, was getting the pitch into the person's hands because one of the cool things about Dead Cells is the combat. It feels nice. Getting past that initial hesitation from platform holders was a challenge. 'Okay, another roguelike game with pixel art and bits of Metroidvania' - that's just a load of buzzwords put together... that was something we had to overcome."

In order to overcome this issue, Filby drew up a list of the top roguelikes and Metroidvania titles on Steam to give the team an indication of just how good Dead Cells had to end up being.

"So then we played the absolute shit out of all of those games, every single member of the team. We then sat down and looked at what those studios had done so that when we were making design decisions, we knew what we were talking about, we knew what we liked and what we did not. The big challenge was trying to come up with solutions to all the problems those games have faced over the years."

The roguelike genre has certainly been a popular genre with indie developers, but not without its problems. Procedural generation - though potentially an efficient means of building a large game quickly - is actually pretty hard to get right. So Motion Twin opted for a balance between the randomness of algorithmic level creation and hard rules to make sure the game never felt unfair. "

"It can be something you can't get past. We're trying to avoid these runs. That process of getting an algorithm that does that without randomness to make things interesting is long and hard. What we came up with was about 50:50 random and curated. Each chunk of a room is hand designed so that we know that certain jumps are doable, some bits are annoying but we made it that way so that's the point.

"When we moved from completely random to handmade chunks that are stitched together, we had random monster positioning. The problem was they'd come together in combinations that were just unfair. You come across enemies that are going to hit you all at once and you can't deal with them all. Once you sort all that it's very quick; but getting to that point is a long and iterative process."

The title launched into Early Access back in May 2017. The decision to release this was was partly to do with the fact this was Motion Twin's first 'proper' PC game and - by Filby's own admission - the team were "absolute noobs". When it was first raised as a possible launch option, Early Access was wildly unpopular internally.

"We had a bit of an internal battle over Early Access; I wanted to do it and they were really against it," Filby says.

"Theirs was a kneejerk reaction about Early Access being full of crap or having a stigma. My argument was to look at what all these other games have done wrong and right in Early Access. It's about approaching the game as a professional development studio.

"We put out what we considered to be the core of the gameplay in a very polished state, missing half of the game. People respected that - they saw that it looked almost like a finished game. It wasn't finished - not even close - but people jumped on board with that. That was part of the strategy right from the beginning. The trick is to respect your community, follow through on your promises and don't oversell what you're doing. Also keep your community informed as to what you are doing."