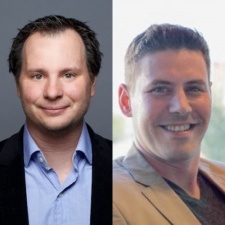 Denuvo's fall from grace has been quite spectacular.

In 2015, the anti-tamper firm was widely seen as the death of piracy in video games, with top cracking groups talking about throwing in the towel. Since, things have been slightly less impressive, with titles like Middle-earth: Shadow of War being cracked within a day its launch at the end of 2017, while earlier this year there were even reports of Final Fantasy XV: Windows Edition's anti-tamper being broken before the game even came out.

When pressed on the topic before, Denuvo said it never claimed to be uncrackable but that its strategy was to safeguard a video game's launch window.

That's a hard argument to make when titles are being cracked this early in their lifecycle. Sales director Elmar Fischer (pictured, above right) says the strategy remains the same but admits that the end of last year was rough for Denuvo.

"It's still about protecting the initial sales window. That's something that varies from publisher to publisher - it can be two months, it can be two weeks. We've had a rough couple of months, especially September and October last year, especially when FIFA and Total War: Warhammer 2 launched and were cracked in hours. It is a cat and mouse game with the ups and downs. We were definitely in a down in autumn of last year."

It was around this point that Denuvo started talking to cybersecurity specialists Irdeto, with the latter snapping up the anti-tamper firm in January of this year. As a result, Fischer says that its offering has improved, pointing to Capcom's Monster Hunter World having not been cracked 22 days after launch (at the time of writing - 10 days after the interview).

"Right now, we are at a point where games are protected pretty significantly," Fischer says.

"Monster Hunter World which is one of the most hyped releases out at the moment is not cracked yet. We think things are back on track."

Being purchased by Irdeto comes with some sizeable advantages. That company has been around for about 50 years now and boasts a great deal of experience protecting paid TV. The cybersecurity specialist also boasts a wealth of insight and patents that it believes are going to improve Denuvo's offering - including a move into anti-cheat.

"If you look at the different threats that are out there for some of the big publishers, particularly people who have really invested in these big online virtual economies," Irdeto director of product marketing for Cybersecurity Services Lucas Catranis (pictured, far right) explains.

"They're doing amazing things but there are lots of ways which malicious actors and characters can exploit the different aspects of those games and create an unfair advantage for themselves or benefit from it financially in a way that the game's creator never intended. We look at some of the technology that Irdeto has and the synergies there, we are the original patent holder for white box cryptography [protecting cryptographic keys even when they are under control of a bad actor]. That's something that we can use as part of this broader security portfolio for games publishers and studios outside of the traditional anti-tamper market."

Obviously, Irdeto and Denuvo need to be quiet about are up to, especially when it comes to anti-cheat, given that any information in the wild could give an advantage to bad actors. But unlike other anti-cheat solutions, Denuvo's is going to be on a hardware level, as well as using emerging tech.

"We have partnerships with the chip manufacturers which is an area I don't think a lot of the other anti-cheat vendors have at the same relationship with some of those vendors," Catranis explains.

"We're a partner with Intel, for example. There are features in modern chips that allow us to bolster the capabilities that we are looking to perform. Some of the stuff we are doing is currently going to be filed for from a patent standpoint so we have to be careful about what we talk about."

We didn't have the people or the experience at Denuvo [to combat bad PR]. A lot of the information out there about Denuvo just isn't true. If we went on a forum to tell them that, we'd be shot down. That's changed now

He continues: "You can look at the broader technological trends that are out there right now and infer from what you see happening in terms of the big movement around AI. It's not just looking at specific devices and machines but there's going to be other elements to it as well to build a more intelligent mechanism for anti-cheat."

Another benefit of working with a bigger company is that Denuvo can start to combat its negative perception. Though Denuvo does offer a valuable service, being a small company - around 45 staff - it didn't have the clout to combat the negative myths - and the subsequent bile - that sprang up and were spread across forums and the PC gaming collective consciousness.

"We didn't have the people or the experience at Denuvo. Whatever we said would be countered. A lot of the information out there about Denuvo just isn't true. If we went on a forum to tell them that, we'd be shot down. You start something and if it's not controlled then it couldn't be controlled later so at one point we decided to just not comment. That's changed now."

This, of course, is going to be an uphill struggle. But Catranis reckons that when the anti-cheat solution is rolled out, the perception around Denuvo will shift.

"It's going to take some time," he says. "Without having an active PR arm, a lot of misconceptions got built up over time. From the Irdeto side, we understand that it's going to take some time to turn what some gamers are antagonistic about into something they actually trust and are happy to have. When we get more involved in the anti-cheat side of things, people will really understand the value that we can bring to the table."

One of the big stories from the last few months that people have used to criticise DRM was the Mac version of Metal Gear Rising: Revengeance being unplayable due to the fact the developer that made it, Transgaming, moved to, um, real estate financing. The DRM system the game required a connection to an external server to verify that this was a legitimate copy of the game. When the company switched industries, the server was shut down meaning no-one could play this version of the game.

A concern around DRM is the risk that this tech will hamstring the game in the long run. Catranis defers responsibility for the use of DRM in the long-term to Denuvo clients.

"Ultimately it's the publisher's decision to remove the protection if they want to," he says.

"Ultimately, we do everything we can to support them capturing the revenue when it's during the launch window. Looking down the road, it's their decision whether they want to remove the protection from the game."

And Fischer points out that Denuvo's business model has changed now to be a bit more flexible - which should stop games being crippled in the long-term.

"When it comes to anti-tampering being on forever, we have a new business model now," he explains.

"The license is based on the duration. When this license is over, there's no more anti-tamper. This problem has fixed itself."

Looking to the next year, Denuvo and Irdeto appear much more confident. With their combined expertise, the duo believes that they can offer a service that achieves more than it has in the last year or so.

"The prime objective is to have anti-tamper prominent as it is, integrated with most publishers and maybe even in one or two of the big releases that we don't have," Fischer says. "And we are looking to build up anti-cheat to the same level."

Catranis adds: "We have some additional, what we call, cyberintelligence or cyber threat intelligence service which is more of an Irdeto publisher level service. That's something we are now actively talking to different publishers about. For us, that's a way to complete the circle of security around games for the publisher. Looking at what the requirements would be and the threats that they face and being able to provide that in combination with our technology is our goal.

He concludes: "We want to be the number one across the board when it comes to who the games industry thinks of for security."