How The Binding of Isaac became a card game 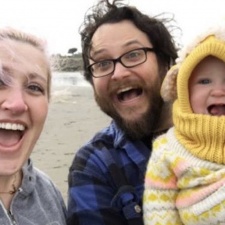 After a great deal of teasing on social media, the developer behind The Binding of Isaac - as well as The End is Nigh - Edmund McMillen (pictured, centre) revealed that that title was being turned into a card game. Dubbed Four Souls, the project is being funded by Kickstarter and was more of a collaborative project between McMillen and his wife, Danielle (pictured, right).

We caught up with the man himself to find out how his physical game came about and about the process by which he has brought the digital hit into the real world.

How did The Binding of Isaac: Four Souls come about?

I was put into contact with a company called Studio71 that helped with creating Joking Hazard and dealing with the Kickstarter and distribution. They asked if I was interested in doing an Isaac board game around the start of development of The End is Nigh. I turned them down, mostly due to me working on The End is Nigh and The Legend of Bumbo, but I also had no ideas for a board game...

Fast forward a year and one weekend while I was sick with the flu I got bored and decided to design something.. I tend to do this when I get bored playing games and start idling - hence why I usually have so many projects going at once.

The design for the card game just flew out of me; I had a basic prototype in three days and after testing it twice I knew it had potential and spent the next week designing a more fleshed out and pretty prototype. after playtesting and tuning for two months I recontacted Studio71 to see if the offer was still on the table and they were all about it. The rest is history.

Tell me a bit about your process for 'adapting' a video game into a card game.

It is super fun. Once I had the foundation down, reverse engineering the mechanics of enemies and monsters in the digital game into a card game was super neat. Showcasing traits like the Duke of Flys extra flys coming out and blocking shots with this new card game formula was a fun logic puzzle that felt very inspired and creative and I enjoyed every minute.

Also just designing the general themes was really cool too, designing the monster deck to feel random, allowing for ambushes, trollings and rewards like gold chests just fell into place very fast.. it felt a lot like when explored the Zelda dungeon structure in the original Binding of Isaac, actually.

What challenges have you encountered in this process?

I found out right away that I had no idea how different a social real-life game is so; drastically different than a single player digital game. It took a bit to acclimate to different personalities and play styles, complementing those personalities and making every aspect of the game fun.

Why turn to Kickstarter to fund the project?

Well, it wasn't really my idea but its realistically the best way to launch a physical game these days. I'm not a big supporter of most digital Kickstarters, especially ones that are in their infancy because so many die before they finish or bite off a lot more than they could chew. When doing this i had a few rules for myself. One: I will only do a Kickstarter if I had a nearly finished product to propose. Two: if we pass our goal I want to try and pack as many extras in peoples games as possible and thirdly, I want this to be a way to make up for my lack of merch over all the years and be sure to add tiers that let backers get exclusive and really cool Isaac merchandise, so they don't have to constantly buy bootleg bullshit.

What lessons have you taken from other crowdfunded projects before launching onto Kickstarter?

Be careful about overseas shipping... and we are. The most common negative we tend to hear with our Kickstarter is that shipping is a lot.. and this is because Studio71 is being very careful about the weight of everything and covering our asses as much as possible so we don't get killed by those costs. So many huge Kickstarters stories I see end with: "We broke even because we didn't realise we needed to charge more for shipping overseas" - and I don't want that to be the case. But we are still trying to add as many extras into boxes to really make sure all fans get as much bang for their buck as possible.

The game reached its goal in just 90 minutes. How was that for you?