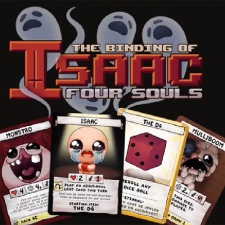 Fucked up indie roguelike title The Binding of Isaac is getting the card game treatment.

The project's original creator Edmund McMillen - of Indie Game: The Movie fame - has taken to Kickstarter for funding.

At the time of writing, the project has raised more than ten-times its initial goal. McMillen set the funding goal at $50,000, with it now standing at $500,000. In fact, the page boasts that it reached its initial funding goal in just 90 minutes - not bad at all.

The project actually started life more than 12 months ago, after McMillen was introduced to Studio71 to make a board game based on the indie title. The creator teamed up with his wife, Danielle, to test what he had come up with.

Speaking to PCGamer, McMillen says that the reason he has decided to crowdfund this is to get extra feedback into the project.

“As we go, even beyond the Kickstarter, hoping we get what we need, I'm going to be very open about development and show the layouts of cards so we can get feedback,” he said.

“I want its design to be as simple as possible without losing depth.” Expect the McMillens to stream play sessions during the campaign, too, to explain the more intricate aspects and demonstrate all the different play-styles one can employ to make things get “very Isaac-y.”