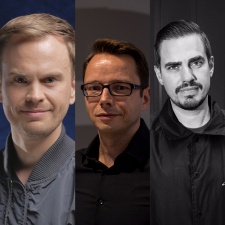 A rather negative narrative around single player games has emerged in the last few years, helped by the death of developers that specialised in this field, such as Visceral Games.

As triple-A companies place more of a focus on multiplayer, games-as-a-service type titles, it's hard to argue with the narrative.

The triple-A single-player market is one that Finland's Remedy Entertainment has built its entire business on - from the noir-tinged Max Payne, to the horror-based Alan Wake and, more recently, the sci-fi video game-slash-TV show Quantum Break.

And, speaking to PCGamesInsider.biz, it's clear the studio doesn't entirely agree with what's been said.

"We need to be a bit more specific. Creating linear single player games that cost $100m just to get to the market does not make commercial sense anymore," chief commercial officer Johannes Paloheimo (right) says.

"However, that does not mean triple-A single player game experiences are dead. It just means that developers and publishers have to be smarter and more efficient in creating and bringing those kinds of games to market.

"Major western publishers are heavily investing into single player content in their blockbuster franchises; Battlefield, Call of Duty and Assassin's Creed are filled with great single player story content and this is what Smilegate is doing with Crossfire 2 together with Remedy. The single-player experience can come as part of something even greater."

Head of communications Thomas Puha (above far right) adds: "Plenty of single player games do great on the market and that’s our forte. It’s the more mega-budget, super linear single player game that are struggling."

Regardless of whether there is a market for single player games, there's no denying that single player titles are proving to provide a lower return on investment for developers and publishers.

Games have never cost less to purchase, thanks to the wonder that is inflation, while the budgets of - well - most games have increased exponentially in the last decade. But CEO Tero Virtala says that Remedy has seen this change coming a mile off and is well-suited to adapt.

"We as a company have thought a lot about this for quite a while and have been preparing for it," he says.

"The writing was on the wall a long time ago. The games industry is always changing, so, on the one hand, everyone needs to keep an eye on the market, and in some areas adapt and try to make sure you try to do things smartly. On the other hand, in our industry, there is always room for development and new ways of creating business. We believe there is a lot of room for innovation in game storytelling.

"While we aim to take new approaches in game storytelling, we do understand that this type of innovation also includes risks. So years ago we decided on our current strategy where we want to work on multiple games to both alleviate risk and to have more control over and ownership of what we create.

"As to how are we weathering these changes? Being smart about how we do things, keeping the quality of our games as high as possible, making carefully planned moves in changing the way we operate, but not do all of it at once as well as taking advantage of the fact that our engine and tools are in great shape, so productivity is faster than before."

Comms chief Puha insists that the changes it is making aren't purely down to market shifts, but are informed by Remedy's desire to try new things

"I do want to make it clear that it is not just due to what the market wants; Remedy has been wanting to make more and different kinds of games for quite a while, so it's not all about reacting to the market, but also what our creative teams want to be doing. Then we try to figure out how to make that financially viable," he says.

"Remedy’s ambition has not wavered, it's still crazy high and we always punch above our weight. We will continue to do so."

"From the get-go, we had a few business parameters we wanted to hit with P7, and one of them was that we wanted to reach a wider audience than we had before. So that meant going multi-platform, which automatically ruled out publishers like Microsoft and Sony," CCO Paloheimo says.

"We were fortunate that P7 generated a lot of positive attention among publishers when we presented them with our vision for the next Remedy game. 505 Games really understood what we wanted to create and felt passionate about helping us build it.

"We were really impressed with the expertise and the humility of everyone working at 505 Games as well as the success they have had with publishing games like Payday 2 and Rocket League. In the end, when you get down to the nuts and bolts, it’s all about creating great games for a passionate audience. 505 Games really understands this; always putting gamers first.

"Finally, from a 'company point of view,' it made perfect sense for us to partner up. Remedy and 505 Games are both in a similar situation with wanting to take our companies to the next level. This also gives our partnership strategic alignment and a common business goal, which can be quite challenging for an independent developer to find."

It's not just the Italian Digital Bros that Remedy is joining forces with; the firm is also working with South Korean games giant Smilegate creating story content for one of the biggest FPS games in the world, CrossFire 2. This is the first time that the Finnish studio has worked with an Eastern outfit.

"We have not worked with an Asian publisher before. Although working with Asian collaborators is nothing new for mobile game developers, especially in Finland, for us it is. It’s definitely been a learning experience for both parties.

"Creating story content for a massive online free-to-play shooter comes with many new things to learn. Cultural and communication differences aside, just the actual process and working methods when it comes to creating single player story content is very different from how Asian companies create their FPS online games. But it’s great to get out of your comfort zone and learn new ways of working.

For Remedy, being part of Crossfire, one of the biggest FPS franchises in the word, and getting the chance to tell stories to more gamers around the world together with Smilegate is a rather exciting opportunity.

"As to how we started to work together, I can see why it might seem a bit surprising to people, but in a nutshell, Smilegate were looking for a western development partner to create a word class story mode and campaign for their next version of Crossfire. They loved our story-telling ambition and the kinds of games we made in the past, and our ideas for the campaign."

As well as signing on the dotted line with companies from around the globe, last year Remedy opted to do an initial public offering - this was in part due to secure its future, both in terms of finance and the quality of games the Finnish studio could developer.

"Additionally, we wanted to start building the kind of Remedy Entertainment that can gradually develop more than one game at a time, and to do that in ways that give us more control and ownership of what we create. Keeping the quality bar high, and keeping the distinctiveness our games have always had, this all adds up financially and it requires capital that Remedy can invest, in addition to the investments from our partners.

"We evaluated the funding options out there, and felt that IPO allowed us to raise capital for our growth while still keeping control of the company in our hands. Additionally, it was good for our most important asset, our people. Being a publicly listed company seems to have increased interest among new talent, and we are looking for new talent all the time.

"Other companies considering funding options should keep in mind that there are many different stock markets nowadays. People often think it’s just about the traditional stock exchange where you would be among big conglomerates, and faced with all the same requirements as they are.

"However, there are other options as well. For example, we are listed on NASDAQ First North, which is a stock exchange for smaller and medium-sized companies. This is an easier way to get on the stock market, but of course, you need to have a well-defined strategy, organisation and processes in place. Obviously, it’s more work for our financial team. Any gaming company that reaches a certain size should have an efficient financial team anyway, in order to let game development teams fully focus on the key thing, creating great games."

For the coming year, Remedy has a number of goals, but the main one is focusing on its seventh game, as well as additional projects it is hard at work on.

"We have goals and ambitions on different levels of the organisation, be that improving various company processes, developing our proprietary technology or working on things related to human resources," Paloheimo says.

"However, our greatest ambitions lie in the games we are currently working on, and unfortunately we can’t tell you much about them yet."

Virtala concludes: "At Remedy we love to entertain and tell stories through games. We constantly need to evolve in how we can tell these stories, how we can provide longer, unique gaming experiences for our players, and how we create our games. We believe that if our ambitions evolve around gamers and how to best entertain them, everyone will eventually be happy in the long run; our fans and gamers, our staff, our partners and our shareholders."

Single player is stronger than ever, says Remedy Entertainment