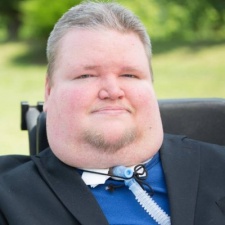 The news was revealed by streamer DrLupo, who told the organisation's COO Steven "Spawn" Spohn (pictured) that the Amazon-owned giant would be giving AbleGamers $1m directly.

"Twitch donating $1,000,000 to AbleGamers is going to *literally* change the lives of thousands of people with disabilities.

"To you who supported me, my work, AbleGamers, and our lofty dream of enabling everyone to play: Thank you

"They did this because of you."

Founded back in 2004, AbleGamers is a charity dedicated to making video games a more accessible medium. In 2019, the organisation said it was embedding reps in triple-A studios to help them bake accessibility into their games.

Accessibility has become a hot topic of conversation in the industry in recent years. In 2018, Microsoft revealed its Adaptive Controller, which was designed to be customisable to the needs of differently-abled players.

Speaking to PCGamesInsider.biz at Develop:Brighton 2018, Mixer program manager, and gaming and disability community lead at the Big M Tara Voekler said that making games more accessibile is not only the right thing to do; it's also good for business. You can read our full interview with Voekler right here.

Her remarks were echoed at the same event the following year by Nopia's Felicia Prehn, who said that catering for disabled people is a good business move.