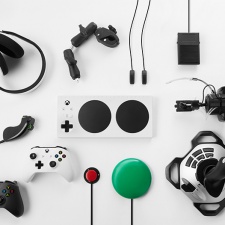 Rumours of an accessibility-minded controller spread earlier this week, after a promotional image leaked on Twitter. Xbox has now made an official announcement for the Xbox Adaptive Controller, a project described as “years in the making.”

"Our goal was to make the device as adaptable as possible,” said Xbox head Phil Spencer. “Gamers can create a setup that works for them in a way that is plug-and-play, extensible, and affordable. In addition to working with common adaptive switches that gamers with limited mobility may already own, it has two large buttons built in. These buttons can also be reprogrammed to act as any of the standard controller's button inputs via the Xbox Accessories app."

Previous options for differently-abled gamers involved expensive or technically challenging modifications to existing controllers. Xbox’s Adaptive Controller is a positive step by Microsoft towards making the experience of playing games as seamless as possible for all players, regardless of ability. Xbox will also be implementing its wider range of avatar customisation options in the future, in a commitment to representing the range of players Microsoft want playing on their system.

Microsoft worked with charities like the UK-based Special Effect to advise on the accessory. The controller is fully programmable, and contains a wide variety of input options to map various buttons to. Third-party manufacturers have been brought on board to provide external input devices to use alongside the Adaptive Controller.

"This has been a milestone collaboration for us," Special Effect founder Dr Mick Donegan said. "Our experience in helping people with complex physical disabilities to access video games has enabled us to provide not only very relevant advice about features and design, but also direct feedback from a user-centred perspective. Microsoft have a product here that has the potential to help many people globally to enjoy the magic of video games."

The controller is set to cost $99.99 when it launches later this year.

You can check out more of what the Adaptive Controller offers in the below video: