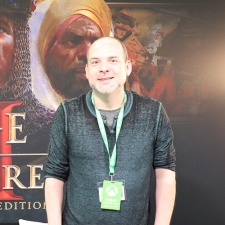 The next Age of Empires title will avoid microtransactions.

As reported by PCGamesN, the game’s creative director Adam Isgreen (pictured) explained that “The idea of microtransactions in a real-time strategy game isn’t a thing. DLC, expansions – all of that is things that we’re going to be exploring for Age 4.”

According to Isgreen, professional players of the title are after new content as opposed to more civilisations.

“Our pro players are even like, please don’t add more civilisations, please do other things,” said Isgreen.

He added: “But we want to have those conversations with the community, to figure out what we can add. What are the things they want to see in the game? Things like game modes.

“While we definitely already have ideas in terms of where we want to go past Age 4, in terms of expansions and stuff, a lot of that is going to be driven by the community and the players, where they want to see the game going.”

Earlier this year we caught up with Isgreen, he explained to us why Microsoft are heavily investing in the series.

There is no scheduled release date for Age of Empires 4.