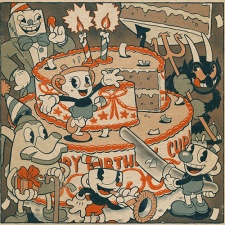 On Twitter (below), the game's creator revealed the milestone meaning the game had sold two million copies since August 2018. At that point, the title had sold over three million units and was only available on PC and Xbox One. Cuphead has since come to Nintendo's Switch hardware which no doubt will be a decent chunk of this extra two million copies.

The game sold two million copies within 12 weeks on its launch in September 2017. We caught up with MDHR co-founder Chad Moldenhauer at the time to go behind the scenes on how the hit indie title was made and how it reached that sales milestone so quickly.

Cuphead is also coming to Netflix with MDHR teaming up with animation firm King Features to launch a TV show. No release date is set for this just yet.

Oh, and that, um, 'eager-anticipated' Tesla version of Cuphead has now been released.

Cuphead was released via Microsoft's [email protected] programme, which launched 1,000 games in its first five years. During that time, the Big M's indie scheme made $1bn in revenue.

Cuphead turns two today, and we're so humbled to announce: it has officially gone five-times platinum!!

Starting now, the game is 20% off on all platforms for a full week. And stay tuned, because we have 5 days of fun and giveaways planned to celebrate 5 million copies sold! pic.twitter.com/oe7uTzY62Y