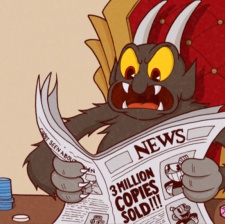 Cuphead has sold over three million copies less than a year after launch.

Developer Studio MDHR announced that the 1930s run-and-gun had gone triple platinum in a blog post this week.

“We’re barely past the halfway mark of 2018, and are humbled to announce that Cuphead has already reached over three million copies sold,” said Studio MDHR’s Ryan Moldenhauer.

“It’s hard for us to express just how appreciative we are to everyone who has played and enjoyed our niche little run & gun game with the wacky rubber-hose characters.”

To commemorate the milestone, Cuphead will go on sale for the next few days on Steam and Xbox.

In June, DLC was announced for Cuphead in the form of The Delicious Last Course. The studio might be busy preparing that for release, but promises: “we still have a couple little tricks up our sleeve before the end of 2018“

We spoke to Studio MDHR co-founder Chad Moldenhauer back in January. He told us: “We're strong believers in that if you have a little bit of business sense and you pour your hearts into a project, we hope that at least a fraction of success should follow”