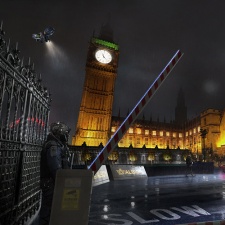 French publishing giant Ubisoft has come under fire for turning to the community for the creation of in-game assets for the upcoming Watch Dogs Legion.

The firm partnered with actor Joseph Gordon-Levitt's HitRecord, continuing the partnership announced on-stage at E3 2018 for the eagerly-anticipated Beyond Good and Evil 2. Several detractors have taken the duo to task, saying that the deal is exploitative for those submitting creative for use in a game with a budget that's presumably huge.

Others have observed that Gordon-Levitt is part of an actors union and thus isn't prepared to work for free. The actor responded to criticism last year over the similar partnership his company had for Beyond Good and Evil 2.

Ubisoft has replied on Twitter (below), saying that people making creative for the game are doing so on a "voluntary" basis.

"The Watch Dogs: Legion Audio team worldwide is already working with professional artists and composers on more than 140 licensed songs, and an original score in the game," the team wrote.

"The additional contributions -- no matter how large or small -- from anyone within the HitRecord community are completely voluntary, and are meant to give them a chance to have their own creative expressions included in the game."

On our partnership with HITRECORD. You can find more info here: https://t.co/QNQv5sjm1R. pic.twitter.com/1k5ugm2gvq