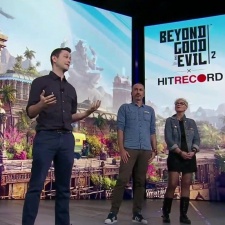 Joseph Gordon-Levitt took to the Ubisoft stage last night to announce that his collaboration platform HitREcord will be crowdsourcing art and music for Beyond Good And Evil 2.

Ubisoft’s conference saw a return visit to the long-dormant world ofBeyond Good And Evil 2, but a snazzy new trailer wasn’t the only news. The publisher revealed plans to plaster the walls of its universe with fan art and compositions.

The “Space Monkey Program” was a project set up last year to get fan feedback on the direction of the title. This year, the project has extended to a call for artists and songwriters to contribute visual and audio assets that may feature

Ubisoft’s blog post on the collaboration reads:“Open to artists of all skill levels and fields, the partnership encourages participants to work with others – including the developers of Beyond Good and Evil 2 themselves – and will offer creative briefings.

Artists will be able to link their HitRECord and Space Monkey Program accounts, and start submitting content with the tag "BGE2" for review by the development team. Creators can submit designs or music, and can build on pre-existing content in the site's archives.

Typical projects on HitREcord operate on a 50/50 revenue split between the platform and contributor. In the case of the sheer scope of Beyond Good and Evil 2, Ubisoft and HitREcord have set aside $50,000 to distribute among all songs and visual assets delivered to Ubisoft Montreal.

HitREcord state that additional funding may be set aside in future. A spokesperson for the platform told Gamasutra that HitREcord payment is based on the asset’s final use in the game, implying that developers of art or music that was used widely throughout the title would be compensated more.

The collaboration has drawn criticism from independent creatives however, lambasted as “speculative” work. Often under the guise of a contest (here, the “get your art into the game!” angle), speculative work sees artists provide labour without guarantee of payment or final ownership of their work. The site No!Spec outlines many further issues commonly associated with the practice.

HITRECORD has allocated $50,000 to be spent on -ALL- of the music and visual art submitted for Beyond Good & Evil 2.
That is less than many AAA salaries.https://t.co/hRA9qwfax8 pic.twitter.com/dAh6iwKXdN

After outcry, Joseph Gordon-Levitt took to Twitter to clarify that HitREcord planned on paying their collaborators. However, questions of ownership and exact numbers still linger.

You are super right. Huge oversight. I think script got trimmed at last minute and we fucked that up. It’s hugely important to me that @hitrecord pays artists fairly. Since 2010 we’ve paid community almost $3 million https://t.co/oauU4IUiyE