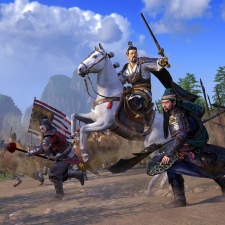 The latest in Creative Assembly’s long-running series has been well-received as a return to form for the developer, after the rocky reception of Thrones of Britannia. By bringing back the classic Romance of the Three Kingdoms saga, the game has found itself wildly popular in China.

Mordhau holds on at No.2, after finally losing three weeks at the top spot. A Plague Tale: Innocence, meanwhile, managed to climb one spot up to No.5. Risk of Rain 2 made a similar climb, stubbornly refusing to leave the Top Ten at No.9.

Cities: Skylines returns to the Weekly Charts with a new content drop. The Campus expansion brings academia to Paradox’s city-builder, completing construction at No.6 this week.

Finally, The Elder Scrolls Online’s latest expansion, Elsweyr, brings Bethesda’s MMO back into the Steam Top Ten. The dragon-filled expansion itself nabbed No.7, while sales of virtual currency Crown Packs closed out this week’s charts at No.10

Total War: Three Kingdoms is the fastest-selling game in the franchise's history