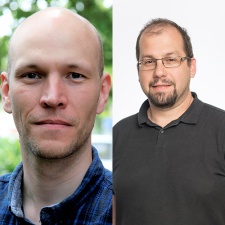 Sega was once known for a certain blue hedgehog, but these days the Japanese publishing giant is arguably most famous for its suite of PC games, such as Sports Interactive's Football Manager, Two Point Hospital from Two Point Studios as well as Creative Assembly's Total War franchise.... as well as, yes, Eastern titles like Yakuza.

The Total War franchise has become one of the most beloved strategy series around, with the most recent entry in Creative Assembly's - Three Kingdoms - breaking records left and right.

"We were confident going into the release but it still exceeded our expectations," chief product officer Rob Bartholomew (right) says.

"On launch day, it broke our franchise records for most concurrent Steam players. Over the weekend, it broke the same record but for the entire strategy genre. Within a week, we sold more than one million copies. We’re very happy.

He continues: "All Total War games pre-order strongly, but this did set a new record for us. China was certainly a factor. From our previous titles, we knew we had an established player base there but for Three Kingdoms they turned up in droves and brought their friends. We’ve also been live-streaming the game for months and earned great reviews. Those are important factors in helping players feel confident in making a day-one purchase."

In a recent interview with GamesIndustry.biz, Bartholomew said that China was a factor in the game's performance so far. Given that this part of the world has been something of a Holy Grail for most Western games companies for some time, setting the latest Total War title in the region could be interpreted as a cynical attempt to try and get a foothold in China. But Three Kingdoms' director Janos Gaspar (above far right) says this wasn't the motivation.

"The setting took us to China, rather than the other way around," he says.

"We always start with what would make a good Total War game. A few of us got together to watch John Woo’s Red Cliff film and we all were blown away at how perfectly Total War it was – we just had to make that game. We knew the setting would attract more attention from Asia, but that was another great reason to do it.

Right now the game is only available in China on Steam via the global client. As a result, Creative Assembly and Sega haven't had to get Three Kingdoms approved by the Chinese government. But the studio did make sure that the game was true to the real-life events, ensuring the history was rendered accurately.

"The Three Kingdoms era is incredibly important to China – both as historical events that shaped the nation and the legends that still inspire and entertain today," Gaspar explains.

"It’s more than just history, it’s part of the national identity. We knew that if we were going to tackle it, we had to do everything we could to get it right.

"We did our research to ground the game in the realities of that time, from weapons and battle tactics to resources and trade. We also worked with consultants to ensure that we were representing the culture in a respectful way and doing the subject matter justice. Of course, we tested the game with Chinese players before release and made some refinements based on their feedback but thankfully there was nothing major.

"We consider it our responsibility and privilege as creators to connect audiences today with the stories that make us who we are. We have a deep respect for the history and culture of nations around the globe and are very committed to introducing new generations to the stories of our past."

Total War: Three Kingdoms was initially set to launch in the back half of 2018, but was bumped to March 7th of this year before a further delay to May 23rd. Bartholomew says he has no regrets from pushing the strategy title's launch window back, pointing to its strong launch and reception now it's in the wild.

"We took extra time to get Three Kingdoms ready for release," he says.

"The reception over the last week or so has really proven that it was the right decision to make, though it wasn’t without its complications at the time. We’re lucky to be in a position to make those decisions for our games and right now we’re very glad that we did."

Asked what the team would do differently if it could do the launch again, Bartholomew says there are a few things, but overall this is the smoothest release Creative Assembly has had to date.

"There are always small things we’ll adjust for next time but overall the team knocked this one out of the park," he says.

"It’s always easier when the game is as strong, stable, polished and fun as Three Kingdoms is now. This was the smoothest launch we’ve had."

Creative Assembly says that Total War: Three Kingdoms has attracted a lot of new players to the series and that it plans to keep those fans around with a wealth of post-launch content.

Though the game has just launched, Bartholomew says this is the franchise's next big tentpole release and is going to be around for a while yet.

"It’s another pillar title for us which will continue to run for years into the future," Bartholomew concludes, "constantly growing the number of chuffed Total War players out there, wherever they are and whatever flavour of the series floats their boat."