Anno 1800 might not be on Steam anymore, but it’s tripled the franchise’s player count on the platform 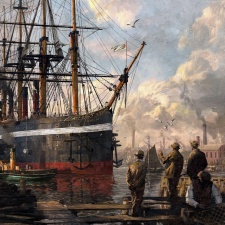 Anno 1800 has tripled the series’ concurrent player count on Steam, shortly after it was removed from the platform entirely.

The revolutionary-era city-builder even managed to make it to No.2 in the Steam Top Ten upon launch. Anno 1800 was taken off Steam after a lengthy pre-order period thanks to, who else, Epic Games signing an exclusivity agreement.

There are currently no stats out there on how well Anno 1800 landed on the Epic Game Store or Uplay.

Regardless, Ubisoft is happy with the game’s success - regardless of the ire it drew for pulling a game off a platform after taking plenty of sales from it.

“After this amazing and successful launch, we now completely focus on delivering the best post-launch content possible for Anno 1800 and can’t wait to show you more,” said managing director Benedikt Grindel.

Anno 1800 isn’t the first game to suddenly drop from Steam after taking pre-orders. Metro Exodus was infamously one of the first games to be snatched up by Epic.

Developer 4A and publisher Deep Silver, in particular, riled fans up further by threatening to pull the franchise off PC.

Ubisoft pulls Might and Magic 10 from sale following DRM controversy