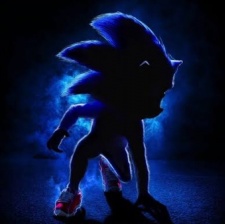 A first look at Sonic The Hedgehog’s big-screen appearance has raised more than a few eyebrows.

On Monday, IGN revealed a teaser for the 2019 flick gave fans an early look at the titular hedgehog’s live-action appearance. But despite being cloaked in shadow (no, not the other hedgehog), Sonic’s new look has raised a few eyebrows.

Take a look at the brand new motion poster for Sonic The Hedgehog right here! pic.twitter.com/15n5APqaM0

This morning, a second poster was discovered for the Sonic film, showing a horrific pair of gangly blue-furred legs sitting over the Golden Gate Bridge.

apparently a poster for Sonic The Hedgehog movie pic.twitter.com/WUrBpN7pOr

Speaking to the outlet, the film team offered some mind-boggling explanations for some of Sonic’s design. In particular, the notably-absent eyes proved to be a point of contention between filmmakers and Sega.

“I don’t think Sega was entirely happy with the eye decision, but these sorts of things you go, ‘It’s going to look weird if we don’t do this,’” said executive producer Tim Miller.

“But everything is a discussion, and that’s kind of the goal, which is to only change what’s necessary and stay true to the rest of it. He’s not going to feel like a Pixar character would because I don’t think that’s the right aesthetic to make it feel like part of our world.”

Sega has been fairly liberal with redesigns to its long-running hedgehog icon over the decades. For them to be troubled over Sonic’s big-screen appearance may not be a good sign of things to come. But the filmmakers are adamant that these changes are vital to making the character look right on the silver screen.

Sonic The Hedgehog will rush into cinemas on November 8th, 2019.