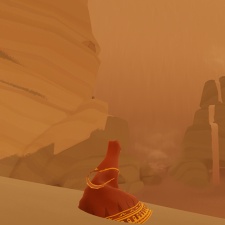 Software and games giant Epic has revealed the launch line-up for its newly-announced storefront that is now live.

Announced at The Game Awards, the roster mostly consists of indie and mid-tier titles, with the biggest news being that Thatgamecompany's Journey - previously a PlayStation exclusive - makes an appearance alongside Darksiders 3, Ashen, Super Meat Boy and Subnautica.

A44's Ashen, Hades from Supergiant Games and Hello Neighbor from Tinybuild are all available now, with THQ Nordic's Darksiders 3 and Subnautica from Unknown Worlds Entertainment launching on December 14th.

That latter title is free from that time until December 27th. Super Meat Boy launches on December 28th, and is available until January 10th. Genesis Alpha One, Journey, Maneater, Outer WIlds, Pathless, Rebel Galaxy Outlaw, Satisfactory and World War Z are simply down as 'coming soon'.

It's early days but this line-up isn't exactly going to set the world on fire just yet.

Epic revealed its new storefront at the start of the week. The timing is suspiciously fortuitous, with the Fortnite firm announcing its marketplace just days after Valve - how to put this delicately - shit the bed with Steam, revealing that developers whose games make more than $10m would see their revenue share drop to 25 per cent from the standard 30 per cent. Once a project makes more than $50m, that figure drops once again to 20 per cent.

At the same time, indies were bemoaning the platform, claiming that they had seen reduced traffic from since October. Valve has since explained what happened here, saying that the issue had stopped. Yet indie developers say it is still going on right now.

Epic's platform is certainly very competitive, with developers keeping 88 per cent of revenue from sales.