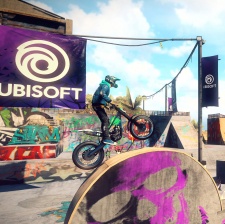 A Ubisoft representative has defended loot boxes after the purchasable crates were announced for Trials Fusion.

Loot boxes have continued to court controversy in recent months as publishers battle with countries determined to regulate what is seen by some as a gambling-adjacent practice. Ubisoft is the latest company to weigh in on the debate, albeit on a much smaller scale.

Gear crates were revealed as part of Trials Rising’s customisation and progression systems back in September and sat unremarked on for weeks. But when a thread drifted to the top of the game’s Steam Discussions page, a bold response from a Ubisoft spokesperson really kicked things off.

“I do appreciate why players feel the way they do about them (not a huge fan myself),” said a rep under the name of Ubi_Warlock in a reply to the Steam thread. “However, as it was also pointed out, you can always just not buy them.

“Ultimately, they’re intended for players who want something to help them stand out from the crowd when playing online, or even just those who are big fans of the game and want to support us further."

The statement continued, admitting that a large part of their addition is the extra profit gained from loot box purchases.

“Yes, it means that some players end up spending more on our games than others and that does result in increased profits for us," read the statement.

"It also helps us to put more money into new titles and to understand what players look for in their games. If players simply didn’t buy these crates, they would not be added into games in future."

It’s this final section that appeared to spark the most vitriol, however, as Ubi_Warlock claimed that real-money mystery boxes had positively benefitted the industry.

“All in all, loot crates/cosmetic items in general have been a huge boon for the gaming industry, being a driving factor in the increased popularity of gaming over the past decade or so. They aren’t a bad thing if done right.”

Ubi_Warlock may be right - loot boxes wouldn’t keep appearing if they weren’t bringing in significant income from players continuing to buy them. But the core of the issues surrounding them comes from their proximity to outright gambling.

An Australian study found that loot boxes are “psychologically akin to gambling” and countries like Belgium and The Netherlands putting their foot down on the practice. Belgium itself is likely to take EA to court over its failure to comply with the country’s gambling laws in FIFA.