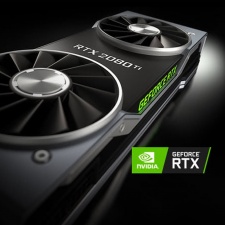 Nvidia showed off its newest range of high-performance graphics cards in a pre-Gamescom live-stream this week.

The RTX 20- series succeeds Nvidia’s GTX 1070, 1080 and 1080 Ti cards at the top of the company’s consumer-level GPU range. These GPUs will be the first consumer-level cards to utilise Nvidia’s Turing architecture, with full support for the long-elusive graphics tech holy grail - real-time ray tracing.

Ray-tracing simulates light in a similar way to the physical world - bouncing millions of rays of light against the environment. It’s an extremely power-intensive task that’s been used in pre-rendered CG for years but has proven troublesome to render in real-time.

Nvidia showcased Turing at SIGGRAPH this year, and powered the Star Wars raytracing demo making the rounds at GDC this year. Our own Alex Calvin spoke to Nvidia yesterday about the GPU manufacturer’s next steps.