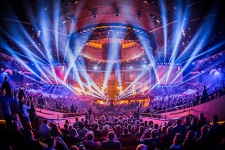 A report from Research and Markets reckons that the global pro-games market will be worth a whopping $2.17bn by 2023.

Currently, the firm estimates the esports sector to be worth $926.3m, meaning that the market will grow a massive 134.3 per cent in the next five years. The report says the industry will grow by 18.61 per cent CAGR during this time.

That might sound like a lot, but the data from this report includes revenue from ticket sales, merchandise, sponsorship, advertisement, publisher fees as well as media rights.

The report also says that broadcasting rights are the biggest area for esports companies, which really says something when you consider that Blizzard is charging $20m per Overwatch League team franchise - a figure that is set to grow.

The Asia Pacific area will be the biggest sector of growth, which is to be expected.

Speaking of this part of the world, Tencent has produced its own research into the growth of the pro-gaming market in China.

The report says that China is the second biggest esports player in the world, following North America. By 2020, Tencent says that 350m Chinese nationals will be playing esports, 59 per cent of the total global. In 2017, Chinese esports fans acounted for 64 per cent o the glboal total.