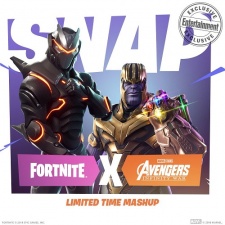 Two giants of media are coming together, as Fortnite: Battle Royale brings Infinity War to the battlefield.

For a limited time, players can take part in a special gameplay mode that brings Avengers villain Thanos to the field. Rounds play out mostly as standard, with the exception of an Infinity Gauntlet dropped somewhere on the map. When picked up, players transform into the purple puncher himself - unable to build or pick up weapons, but armed with an arsenal of special abilities.

Infinity War directors Joe and Anthony Russo appear to be fans of Epic’s hit, taking breaks between editing to squeeze in rounds of Battle Royale. The pair contacted Donald Mustard, worldwide creative director of Epic games, about a potential collaboration between the two franchises.

“Over the past few months, while we were editing Infinity War, we’d take breaks to hop on and get in a few games,” Joe Russo told Entertainment Weekly in an exclusive interview. “And then we started thinking, how cool would it be to have some kind of Avengers–Fortnite mashup?”

“Out of the blue, I get this call from Joe. And after a bit of geeking out over each other’s work, we start brainstorming these crazy ideas,” said Mustard.

“It was really important that whatever we did, it had to be super authentic to both Fortnite and the Avengers: Infinity War, and something that fans of both would be excited about. About an hour later, we had the bones of this awesome idea for a limited time gameplay mode, and almost immediately our team got started.”

Fortnite continues to dominate games culture, bringing in $223 million in March alone. This is the first time Fortnite has teamed up with outsiders to create themed events for Fortnite. If successful, this could set a precedent for future collaborations across media franchises. Fortnite: Star Wars, anyone?

The Infinity Gauntlet mode is available now, for free, across all platforms.