Total War is headed to China with Three Kingdoms game 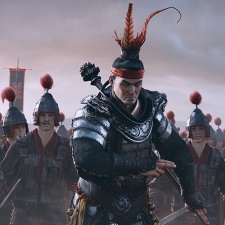 Historical strategy franchise Total War is taking a break from Western battles and is setting sail for the East.

Total War: Three Kingdoms takes the series to China and will the titular time period which saw a number of exceptionally bloody conflicts break out between the three regions of the country.

The title starts off in 190AD, and will presumably cover a great deal of the conflict, which only ended 90 years later in 280AD.

Total War: Three Kingdoms is slated to release in autumn 2018.

Three Kingdoms is one of four projects that developer Creative Assembly currently has in the pipeline. There's on-going work on Total War: Warhammer - with the team issuing a frank statement as to the mistakes made on that project. The studio is also hiring for its biggest multiplatform project yet. That's being handled by the team behind Alien Isolation and Halo Wars 2.

Meanwhile, the first Total War Saga game, Thrones of Britannia, is also set to be released this year.

Then there's the free-to-play Total War Arena, which saw the company partnering with Wargaming's Alliance label.

Here is a trailer for the upcoming strategy game: