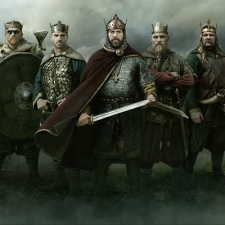 There is a brand new series of Total War games on the way.

Sega has revealed the first release in what will be ‘A Total War Saga’, called Thrones of Britannia. This project takes the RTS franchise back to 878 AD and follows the Viking invasion of Britain, with players taking on the roles of various rulers of England, Ireland, Scotland and Wales to fight among themselves.

Sega and Creative Assembly boast that this is the most detailed Total War campaign map yet. Thrones of Britannia is pencilled in for a 2018 release.

“Our aim with Total War Sagas is to explore key flashpoints at distinct places and times in history,” series director Mike Simpson said.

“Unlike our era-spanning titles, we’re putting defined geographical areas under the microscope, building super-detailed campaign maps with a strong cultural focus and flavour that players can dive into. This will complement our broader-scope titles perfectly.”

This isn’t the first Total War spin-off we have seen. Last year Sega revealed that it was teaming up with Wargaming’s Alliance able for Total War Arena.

Here is a teaser: