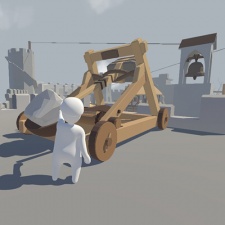 Physics-based puzzle title Human: Fall Flat has crossed over the one million sales mark on Steam, PCGamesInsider.biz can reveal.

The firm says that 80 per cent of the game's sales occurred in the last three months.

The title was originally launched in July 2016 and has been a big seller, at least in part, due to its popularity with the YouTube and streaming community. When we spoke to the indie publisher in September 2017, the title had in the region of 70m views on YouTube.

Curve also says that the introduction of online multiplayer - and a Christmas-themed level - have boosted sales.

“People talk about the long tail of digital, but we have never seen it wag like it’s done with Human: Fall Flat recently,” Curve MD Jason Perkins said.

“It just goes to show that supporting a title way beyond its initial launch can reap huge rewards. The reception we’ve had to the online multiplayer has been brilliant and we’re accelerating plans to bring that functionality to other formats too. As the game enters its second year of sale, we’re confident in saying that this will be its biggest yet.”

Developer Tomas Sakalauska added: "I’ve been staggered by the continued response to the game. To think that the game prototype which began with me experimenting with early, sketched-out levels with my son, giggling as we discovered new ways to play, now boasts a worldwide audience of over one million Steam players - it's been a phenomenal journey. The enthusiasm from the player base is certainly spurring me on to give them even more content. I can’t wait for the world to see where Human: Fall Flat goes next.”