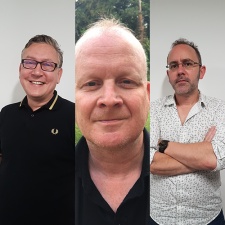 We’re now in the third chapter of Curve’s life.

The company started out in 2005 as Curve Studios, a game developer that worked on titles such as Explodemon, Fluidity and Stealth Bastard aka Stealth Inc.

That all changed in 2013, when the company began publishing games with its Curve Digital arm.

At the start of this second part - let's call it Curve 2.0 - the company’s strategy was initially doing in-house ports of games that had been popular on Steam - such as Stealth Inc and Thomas Was Alone - and moving them to console. This changed over time, with multi-format releases becoming more common.

But the third chapter began when the company was acquired by The Catalis Group at the start of 2016. In the process, Curve merged with Kuju to form Curve Digital Entertainment.

Now, the company has the backing to compete in the ever-competitive and fast-growing indie games market.

“Being quite harsh about it, what we were seeing when we were meeting with developers before was that where studios needed £10k to get something finished, or they needed help with a port cost, we started to come across developers who needed £200,000 to £1m to get a game done,” MD Jason Perkins (right) explains.

“We knew that, as a publisher, when we were independent we would find it more of a struggle to be competitive and sign those titles. The key thing for me was that the acquisition by Catalis meant we could get access to funding which we did not have before.”

Publishing director Simon Byron (pictured, far right) adds: “Along with war chest and the backing that we have had in becoming part of the Catalis Group, being able to be a bit more flexible has been really important. I'm not sure that any agreement we have ever done has been identical. We are able to tailor our business proposals depending on what each individual developer needs. We have a range of options available now depending on a more vast range of services that people need. That flexibility has been really important.”

But overall, it allowed the studio to have loftier goals than it might have had before.

“We still have to be careful and make sure we walk before we can run and all that. But we were a small company in a land of indie publishers. [The acquisition] has allowed us to move forward. We'll double in size this year; we wouldn't have been able to do that were we not acquired.”

Within the last 18 months, the team also believes it has established itself as a PC publisher. As said before, Curve would often port successful PC games to console; now it is releasing some projects first on PC.

Human Fall Flat hit the platform in July 2016 and saw success, in part, due to it being popular with streamers and YouTubers.

To date, Curve says the game has between 70 and 80m views on YouTube alone. Nope, that’s not a typo.

“Human Fall Flat became massive without anybody really noticing, and that's absolutely driven by the type of game that it is,” Byron says.

“Tomas, the developer, wanted to do something that appealed specifically to YouTubers, and it really caught on and actually, that changed our original strategy of launching it. We were considering launching it on all the formats at the same time. There was a prototype up, just a short taster and it was just doing staggering amounts of views; it really caught the imagination and so, we decided to go PC first and it was absolutely the right thing to do.

"Every year I take a look at the games we’ve published in the last 12 months and rank them by Metacritic. Then we look at sales, and often they're the opposite way around. It's really interesting because being good isn't good enough anymore. Having a high Metacritic score is not as important as it used to be. It's just making sure that there's general and widespread awareness out there.”

Perkins adds: “We can look at real times sales data and often we'll go: 'what's happened here?' because one of our games will have had a sales spike. Then we find out that Markiplier has decided to do a random stream on it. It's amazing.”

The decision to release Human Fall Flat on PC first was more out of necessity rather than being a conscious strategy.

“The game had so many views on YouTube; we felt we really had something here,” Perkins explains.

“Thomas is quite literally a one-man development team, so to let us port the project, we'd be looking at a release more than six months down the line. We've used that argument before; you only have so many marketing dollars so let's spread wide and launch with everything. With Human Fall Flat you don't necessarily need to do that. We just push out to more influencers and streamers now.”

But releasing a project on PC first also assists the the other versions of your games, Curve says.

“There are a number of games recently that have come out on PC and console and they seem to be struggling” Byron says.

“If you can demonstrate a hit already, it gives the other formats and stores confidence to back you. You look at our sales spikes on console, last year our first biggest project were all very different games, but they were the four games that have already been out on PC.

“We love Bomber Crew. If we can make it work on PC it will enjoy great success on console and other formats as well. It feels like a PC game to start with as well.”

The coming year sees Curve fully execute on its vision for growth with what seems to be an impressive line-up.

“We were chatting through next year's schedule recently, and it's only when you see them all up there together, you realise how impressive the slate of games we have coming up is,” Byron says.

“If you compare where we were last year to where we'll be next year, you can see that transition. Our slate is looking incredibly strong for next year. We're looking forward to publishing at different price points. There is no simple route; there's no button you can press to successfully launch a game, but I have huge confidence. We have signed the right titles that are meeting the right areas, right formats, the right developers.

“It's going to be really exciting.”