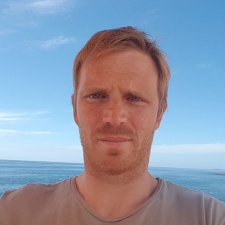 Human: Fall Flat from developer No Brakes Games - aka Tomas Sakalauskas - and publisher Curve Digital is the definition of a sleeper hit.

The title launched way back in July 2016, and quietly garnered a lot of success in the background thanks in part to streamers and YouTubers.

But it wasn't until a multiplayer patch was rolled out in November 2017 that the game started to do gangbusters. By the start of January, the title hit one million sales on Steam, while it went on to smash two million copies earlier this month across all formats. The bulk of that figure - 1.7m - were PC sales.

We caught up with Sakalauskas to talk about the success of Human: Fall Flat.

What was the initial thinking behind Human: Fall Flat?

None. Human Fall Flat was a complete accident - an experiment to create a new kind of character controller. Initially, it was meant to be used with the Intel RealSense camera. But to make prototyping faster, I made a version designed for a controller. I liked the animation of the “dancing hands” simulator but this wasn’t a game I’d imagine myself playing for hours. I then introduced a crate and a plank with the objective of moving the box across a gap by placing the plank as a bridge. All of the failures trying to achieve the objective looked kind of funny and inspiring.

I decided to use these controls and build a baby of Portal and Limbo, borrowing mechanical interaction and cube-shaped test chambers. I wanted to create a non-violent game, so I was looking for a respawn mechanics – which I borrowed from my old mobile game Pocket Sheep. I needed arguments for this respawn and the dream theme was a good choice. It also allowed a lot of freedom in level design and matched the sleepy character - he’s not drunk, he’s sleepy. Real-life dreams have interesting qualities worth exploring – you use your normal capabilities but they are augmented, interactions follows the rules of physics in most of the cases, the world feels familiar and believable even when it makes no sense.

I had no level loading implemented in the initial prototypes, so I arranged a couple of puzzles together and playtesters discovered that you can actually wander around the world, paying no attention to the carefully crafted flow of the game. This looked even more fun that solving the puzzles. Reacting to playtests kept making levels bigger, less watertight, with solutions discovered during playtests later added to the game.

Stories like Cuphead or They Are Billions illustrate where the industry is at the end of 2017 – great games have their audience sell and they sell well. Unfortunately, there are, and always were, really great games that somehow did not reach their audience.

Before you launched, what were your expectations for the game?

I had too many launches and each one had very different expectations. The Itch.io launch was highly over-optimistic - I didn’t think very far ahead but I hoped the sales would be able to support further development of the game. This was not the case, at least not until Matt Shea and Draegast streamed the game. Markiplier and Jacksepticeye videos were next and I was quite pleased with the results and started planning the Steam launch.

I realised that I couldn’t handle both the game development and the marketing as a single man effort, especially with the little cash I had left after several failed projects. The only thing smaller than the balance of my account was experience publishing games, so I’m really glad I ran into nice people at Curve Digital. With over 100m YouTube views before the Steam launch I knew it would be a success. I really thought I’d sell about 50,000 the first month and maybe even reach 100,000-lifetime sales. I had similar expectations for cumulative figures on consoles.

What do you think the success of Human: Fall Flat says about the games industry right now?

Unfortunately, it does not say much. Statistically Human: Fall Flat is insignificant. It’s one of 16 paid games reaching over two million sales released in 2016, which is two games more than 2015 - that's a similar statistic to previous years.

I did not make a full analysis but similar conclusions can be made for other thresholds like one million. This means that there are no changes on the demand side, and there’s not much change in the supply, that is targeted at that demand. Doubling the number of new releases each year is not the number any game developer should worry about. You should check what’s behind those numbers. There was news of hundreds of game-like objects submitted by a single developer removed from Steam. If you go through the full list of new releases it’s quite hard to actually find a release that is not an asset flip or tutorial project.

The thing that changed is that the strategy of releasing the game and getting sales through the new releases list is no longer a valid strategy. I did not make games before, but honestly, I doubt that it ever was a valid strategy. Stories like Cuphead or They Are Billions illustrate where the industry is at the end of 2017 – great games have their audience sell and they sell well. Unfortunately, there are, and always were, really great games that somehow did not reach their audience. Human: Fall Flat shows that this is just a lottery, anyone who cared enough to buy a ticket has a chance. And no, you can’t plan on winning a lottery.

What about the game do you think speaks to its audience?

I know it’s the worst thing to do when designing a game, but I’ve made a game that I wanted to play myself. I took the best parts of the games I loved and made them better (in my personal understanding of it), then glued it together using some unique mechanics designed closely watching playthroughs of real players interacting with the game.

To list a few: physics-based interaction with game objects to give weight to objects, make it believable and increase immersion. There's a wide range of puzzles – I’m adding new mechanics or several of them to each level. I tried to time them so that the game feels fresh from the start to credits. Zero resistance to progress and to fail in-game – there are no loading screens, no 'You Failed' screens, nothing. Comedy of failure keeps players smiling, even when they fail to solve a puzzle. Feeling more clever than the puzzle designer is really empowering in any game that uses this technique - in Human: Fall Flat there are many places where you can find a far more interesting solution than the obvious one.

While most of those solutions made it to the final game because attempts of them were observed in playthroughs, I still keep discovering new ones in YouTube videos. This means that no two games will ever be the same. Actually, because the physics are non-deterministic, it’s very likely that players will experience different outcomes even while performing similar actions. Add free-hand character painting and you get a unique and personal experience for everyone who plays the game - plus, totally new experiences with every person you can persuade into playing coop with you.

If you were to launch the game, what would you do differently? What lessons have you learnt?

The success feels too fragile. I’d be afraid to change a single thing or pretend I know how to do it right. I’m quite happy with where the game currently is. I have still kept fixing the biggest level-design mistakes post-launch, but proper reshaping later levels would be quite painful at this stage.

The takeaway is the same as in any game design textbook – prototype and playtest more than you think is necessary.

Why do you think the multiplayer patch triggered such a massive spike in sales?

I have no idea would be the honest answer. Trying to speculate what might have caused the spike, I’d assume that the community likes being listened to. Multiplayer was added based on numerous requests in spite of uncertainty if it would even work. Even the very unstable multiplayer betas were positively received and the players were supportive through the process.

Also, some big streams happened in China - I saw Chinese sales grow much faster than the rest of the world. And then once you reach the charts, it becomes self-fulfilling – people see a game that sells well, they are interested to check out why boosting the sales once again.

What’s your plan or ambition for the game moving forwards?

I want to bring the second most requested feature after multiplayer – workshop support. I was a bit distracted adding a pair of character skins dedicated to Chinese new year - I really had to say thanks to my Chinese supporters. Now I’m back porting the game to a newer version of Unity, besides providing some eye-candy it will enable re-architecturing the game for modding. I never plan too much into the future – there are too many unknowns (no game reference intended). Let’s wait and see where this workshop stage takes the game.